On the Passing of Andrew Wyeth 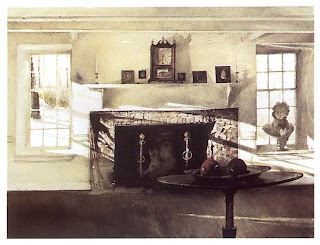 Painter Andrew Wyeth died January 16 in his sleep in his home in Chadds Ford, Pennsylvania, at the age of 91. I remember in the early 1960s, when Wyeth's painting came to the fore and my mother hung four of them in our living room. We lived near Chadds Ford and were very proud of him as a painter for that reason alone. Newspaper accounts of his life since his death two days ago indicate that he was derided by the reigning New York art world for his attachment to realism, whereas they reveled in iconoclasm or in iconoclastic iconism (Warhol et al.). Wyeth worked primarily in watercolor and tempera, and his paintings often seem to have a quality of layering of light. 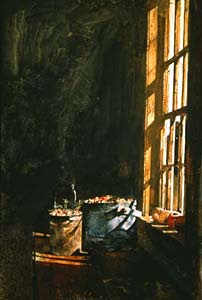 His was a painting of subtraction. Stating that his thought was abstract, Wyeth told an interviewer, "I've often said, 'If I was really good, I could have done the field in Christina's World without her in there.' The less you have in a subject, the better the picture is, really." I think that practice of subtraction is also what makes it difficult to imagine the framing of Wyeth's paintings. Framing and matting would seem to intrude on the contemplative mood of most of his painting with a rude tap on the shoulder.


In a review of a 1996 show, one of us asked: "Why does the railing curve away from us while the floorboards of the deck proceed straight as a ruler? And how can a white chair in shadow be as white as a white rail in sunlight?"
But more important, Wyeth was loved, admired, defended and respected by countless Americans not because of either his realism or his abstraction but because of the way he made us feel.
He didn't take us back to Eden, in the manner of Renaissance pastoralists, he took us back to the moment of exile from Eden, the excruciating poignancy of the moment mankind came to know death. The fruits of Paradise are gone, the trees are bare ruined choirs, the sedge has withered from the lake and no birds sing as Shakespeare and Keats wrote in evoking the same feelings.
For all his realism, the America he shows is dead and gone, "lost and by the wind grieved," as Thomas Wolfe put it. 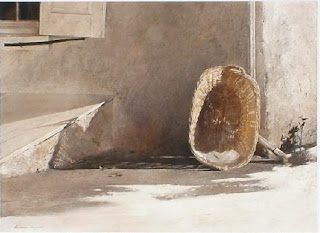 Wyeth's audience finds its identity in Britain and a lost agrarian past. Modernists find it in cities and the Continent. He appeals to the sort of people who take pride in loss, as shown in his paintings where snow blows over the dead land with the glamour of some kind of aftermath. He pairs grief with a celebration of innocence.
Wyeth makes us the main character in any painting, in part because there are so few people in his work. By contrast, Norman Rockwell, another realist lambasted by critics, makes us spectators at a gala show. Rockwell celebrates the community; Wyeth puts the individual at center stage, even when that individual is only an unseen viewer, which is to say us, alone as our Puritan ancestors brooding on their souls.
We admire and crave the tradition and continuity that the whole Wyeth family has shown in its works and lives. But Andrew Wyeth forces us to go back and back to loss, however painful, in the manner of tongues seeking a sore tooth. He shares a sense of tragedy that is especially common among old English stock like himself. People are grateful to him for reassuring them that their nostalgias, fantasies and would-be realities are real.
Has anyone done what he did, and done it better?

I find this to be a kind of literalist approach to Wyeth's painting, as if the subject of a poem were the words. The power of Wyeth's work, which was embraced by the American people, is its poetry, which lifts us out of time to something more mysterious and eternal.
Posted by Linda at Sunday, January 18, 2009

His use of light is absolutely marvelous. He was the quintessential American painter, wasn't he? Truly an American treasure. Wonderful post.

I came across your blog today and have enjoyed all that I've read. I appreciate your thoughtful insights on Wyeth. His paintings evoke in me a feeling of calm and beckon me to sit and savor them for awhile. Very nice. Thank you.
~Silvana

We need also to acknowledge the visual/artistic debt he owes to fellow American painter, Edward Hopper, who, before Wyeth, mined the pictorial effect of "loss" or loneliness. Hopper, of course, studied abroad, unlike Wyeth.

Hopper's art was one of - as I've read it said about the great Frenchman, Edouard Manet - magisterial editorial simplifications. Hopper knew just what to edit out of a painting to make the work, the effect of the work, more potent.

See this comparison. Which is the REAL Hopper? Stay on the image for a while as it changes. :-)
http://www.veronadesign.biz/hopper-comparison.gif