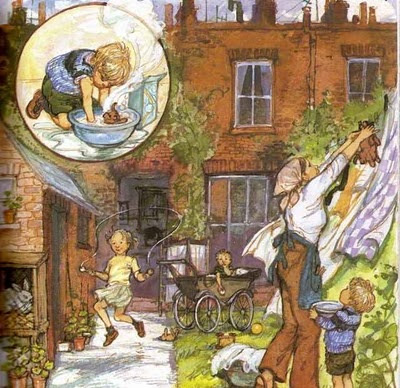 I recently read two Persephone books back to back that portrayed mothers in England in the years between the two world wars: Hostages to Fortune by Elizabeth Cambridge (Persephone No. 41) first published in 1933, and The Squire by Enid Bagnold (Persephone No. 103) first published in 1938.
Hostages to Fortune chronicles the trials, dappled with happiness, of Catherine, her husband William, and their three children from 1917 to the mid-1930s, when England was struggling to recover from the losses of the First World War. Both William, a doctor, and Catherine are middle-class, living in an old, drafty home and keeping a large vegetable garden and fruit trees as an economic necessity. Catherine sews clothes, does the shopping,  teaches her children how to read and write, and wrestles with the servants--a cook and a nurse. 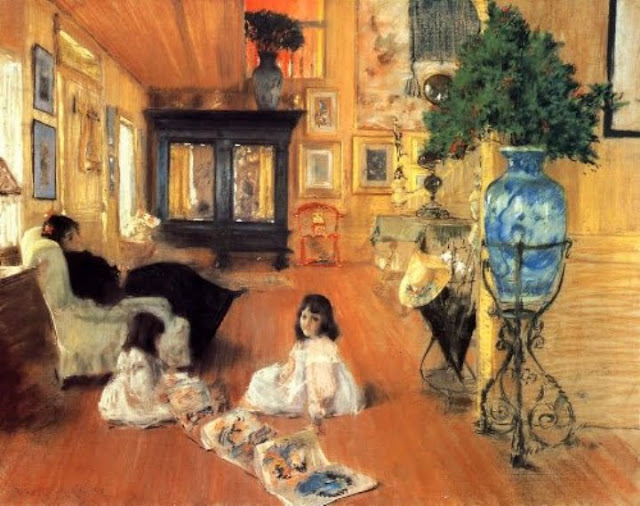 The Squire relates the unspoken thoughts of the lady of the house in the several days leading up to the birth of her fifth child and the month thereafter. As the title connotes, the Squire is a member of the upper middle class, living in the Manor House on the village green. The lady of the house is referred to throughout as the Squire, because her husband is away on a three-month business trip to Bombay. The Squire works on her flower garden, does sporadic hand sewing, keeps an eye on her imaginative and boisterous four children, and wrestles with the servants--a butler, a cook, a kitchen maid, a nurse, and a nursemaid, at least.

Both books are semi-autobiographical, both Cambridge and Bagnold were highly successful novelists, both had abiding marriages and several children. Delightful in both books are the distinct and expressive personalities of the children, portrayed in loving detail with snippets of fresh and lively dialogue. And in both books, the main character's primary concern is her children and her relationship with them.

The differences between these novels lie in the character and circumstances of the women. In Hostages to Fortune, we see the growth of a woman who has deep doubts about her ability to love her children enough, to teach and guide them, eventually comes to like and accept them, and have confidence in her own mothering. In the first third of the book, she is frustrated because her enormous workload in keeping her home and family going with very little money makes it impossible for her to pursue her youthful dream of becoming a writer; her children are her top priority and she does not want to hand over their care to other people. We hear Catherine's laments that the family never has money for the slightest luxury or vacation. Her husband is absorbed in his dedication as the doctor to the village and surrounding countryside and only learns to appreciate his children as they grow older.

The family has few leisure moments together when they are all relaxed--a rare jaunt to the countryside in an afternoon. They spend hours each week in the garden, working, playing, fighting. At the end of the book, Catherine and her husband are riding home in the car after a "last day" graduation party for her oldest daughter, and he puts his hand on her knee in gratitude for her years of effort for him and their children. Catherine is also thinking of the past 15 years of doubts and difficulties and recognizes that her children will soon be leaving and she must let loose her hold on them; she realizes that she cannot plan her children's future happiness.

The Squire's contemplations are far different. The birth of her fifth child, which she looks forward to in total confidence, prompts her to ponder the nature of time, the "naval line" between herself and her children, and how her children embody her own immortality. At the end of the book, "with a deep female pride, she felt herself an archway through which her children flowed; and cared less that the clock in the arch's crown ticked Time away." She considers her mother, herself, and her newborn daughter as one being progressing through time. She thinks of her children as extensions of herself. These thoughts of an existential nature may be prompted not only by the Squire's age--forty-four--but also by the horizons of 1937-1938 that threatened war, yet again. At the closing of the book, she writes her weekly letter to Bombay, but otherwise, her husband is in the outer orbits of her mind. 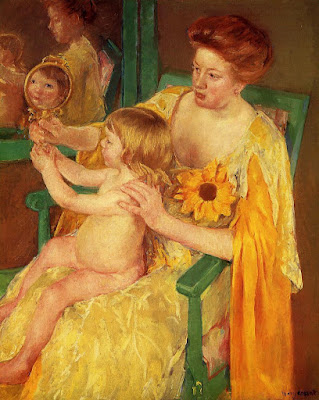 Thus, although the subject of these books is the same, each produces very different impressions in the reader. With Hostages to Fortune we watch a woman who gropes her way to overcoming challenges posed by her economic circumstances, her desires, and her lack of experience. In the end the author evokes a  family bound by a strong though silent continuity of love, a family she holds together. In Enid Bagnold's novel, the Squire loves her children as herself and in the final analysis, is the master of the house but psychologically alone.
Posted by Linda at Friday, August 16, 2019 No comments:

Gifts of the Sky

Every day God paints the most beautiful paintings in the sky. One atheist friend of mine said that she had no appreciation of religious art at all, but then she saw the blue of the garb that Raphael had arrayed the Virgin Mary in, and it took her breath away. Isn’t that the clear blue of the sky? or of a calm sea on a cloudless day? Our Lady, Queen of the Sea?

Everyday it is there, for the taking, absolutely free. Even on those cloudy days, when we are impatient for sunlight, when we look at the sky as a gift all wrapped up especially for our eyes, we see its unfathomable beauty, the multi-layered clouds moving against or with each other, the intricate gradations of tones of one color, the variation in texture, from stern unmottled grey to wisps of cloud catching stray sunlight, like running children taunting their firmer and sterner parents from a frayed distance.

Oh God, how great is Thy love for us!  Thank you, Lord, for reminding us each and every day of thy bounteous gifts for our eyes—the window to our soul. Amen. 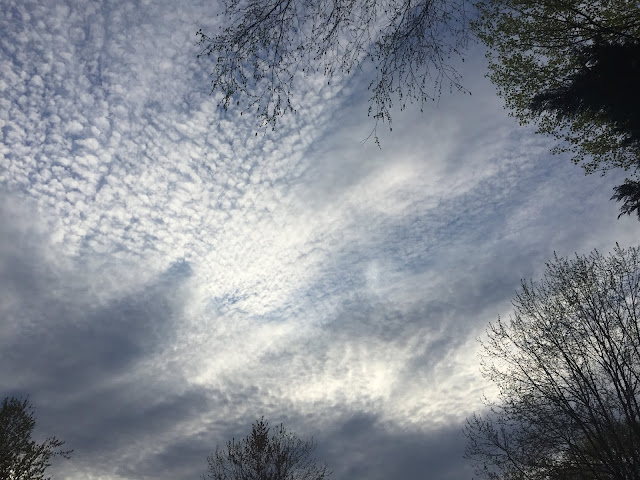 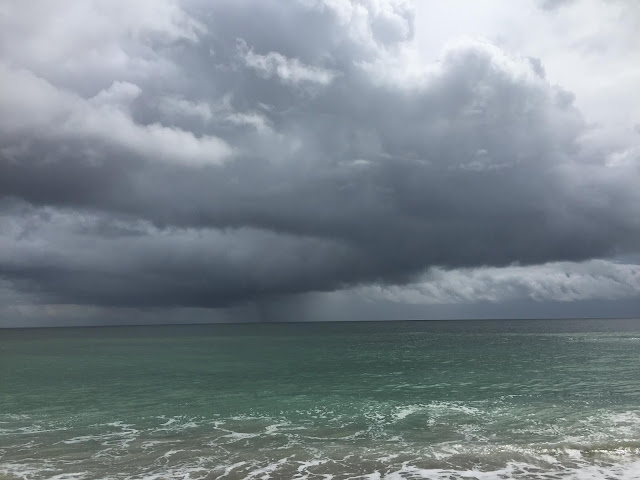 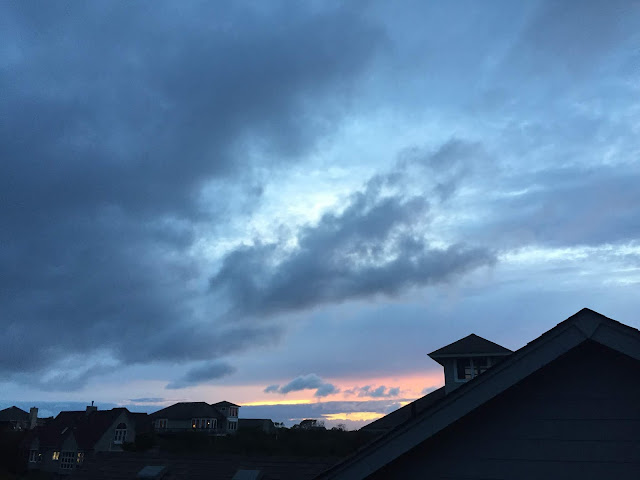 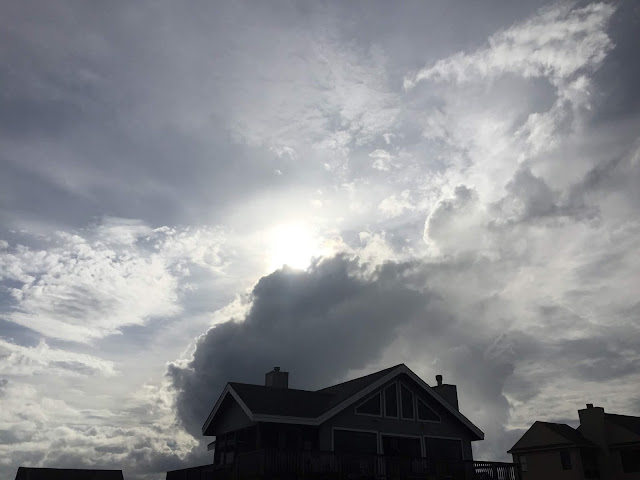 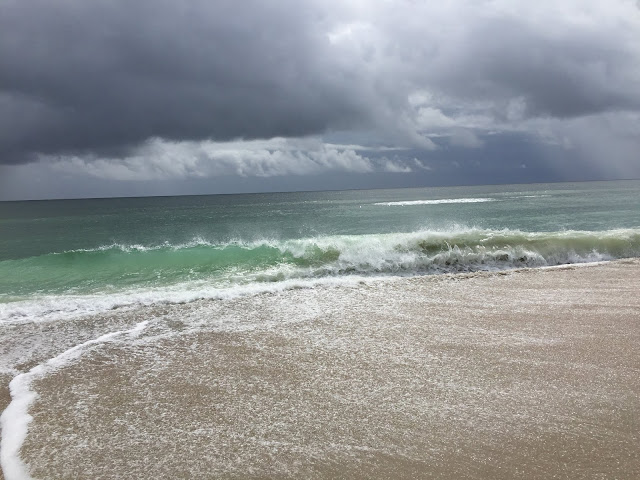 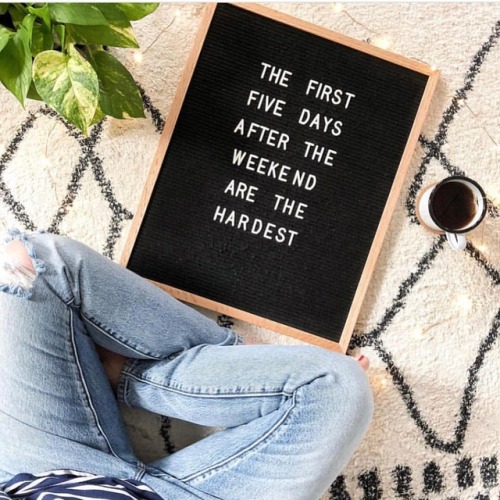 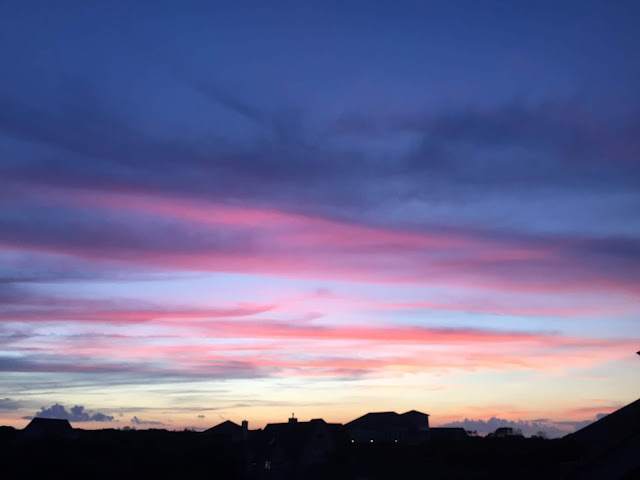 Posted by Linda at Saturday, September 01, 2018 No comments: 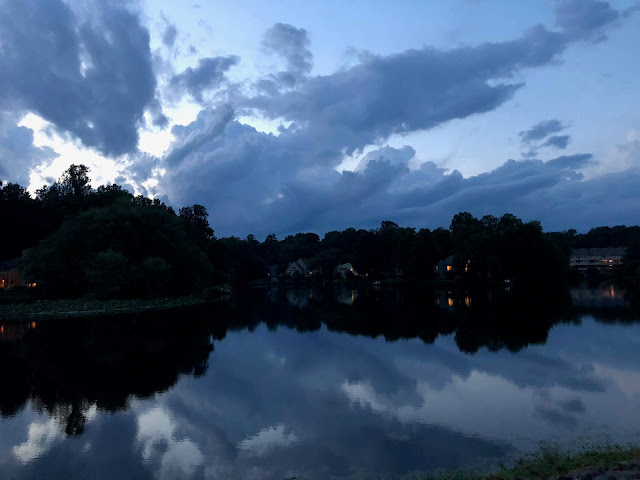 Posted by Linda at Saturday, September 01, 2018 No comments:

Drama of the Skies 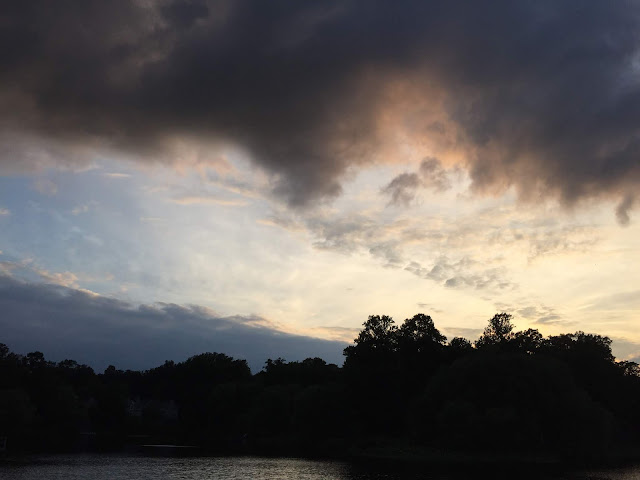 A sequence one evening 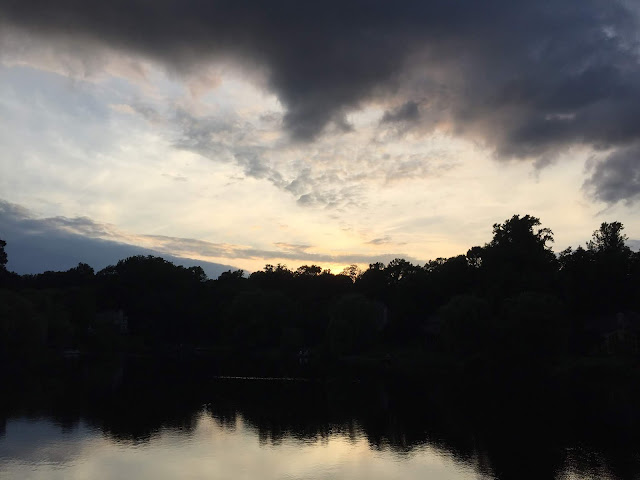 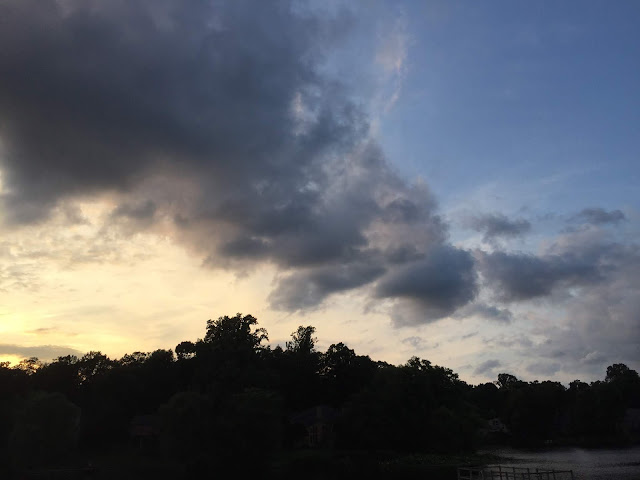 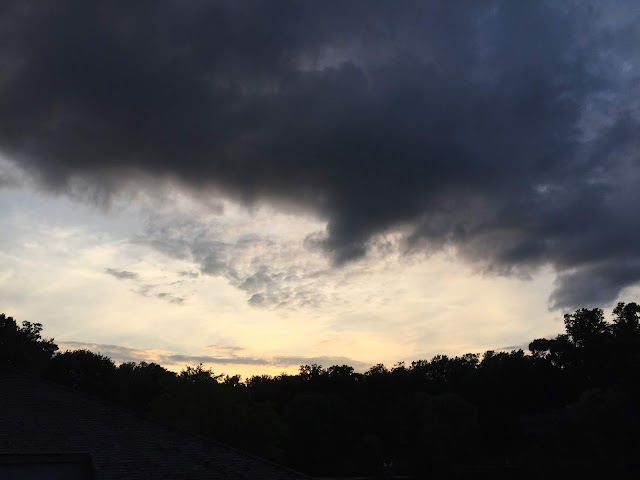 and the next evening 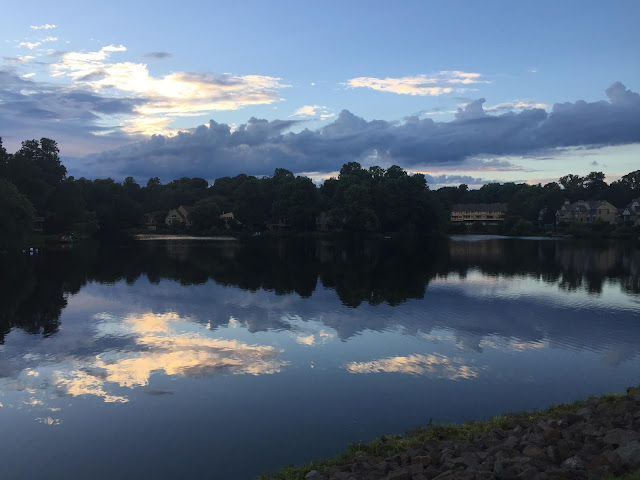 In Praise of Hands 3 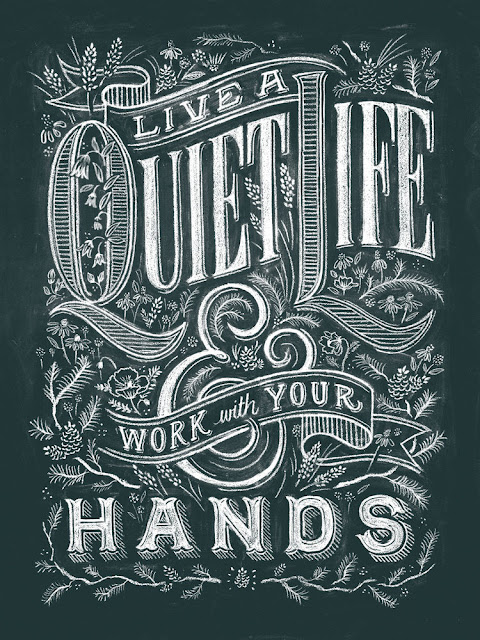 by Dana Tanamachi
Posted by Linda at Thursday, July 05, 2018 No comments:

In Praise of Hands by Henri Focillon 2 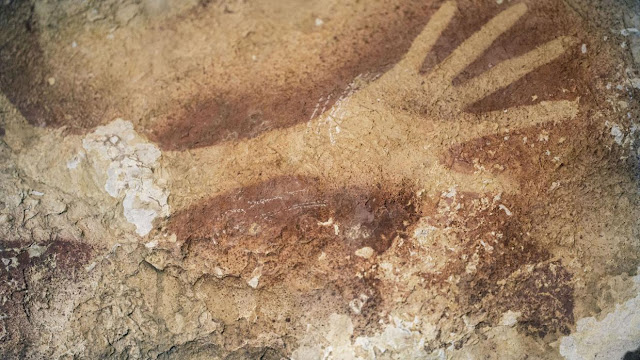 Hand print found in a cave in Borneo with other images created by cave people.

No matter where found, the ancient art of the cave people features the stenciled or traced hand.

"The human hand forms one of the most ancient themes of human art," reports a study of hand stencils in Upper Palaeolithic cave art, published by Durham University. "Prehistoric examples of hand prints (positive images formed by covering the hand with paint and placing it on a surface, rather like modern children create) and stencils (negative images formed by placing the hand against a surface and blowing paint around it) are known from prehistoric contexts in Latin America, the Sahara, Indonesia, Australia and Tasmania, in many cases dating back several thousand years. For decades these have been thought to be Mid Upper Palaeolithic in age (around 22-29,000 14C BP) but recent dating and critical evaluation of existing data have shown that they are among the earliest examples of European Upper Palaeolithic cave art., stretching back at least to 35,000 (calendar) years ago."

Investigations by Anthropology professor Dean Snow at Pennsylvania State University further show that many of the hands stenciled or traced are those of women, and it is thought that this could mean that the stenciling of hands had a religious significance.

Henri Focillion would not be surprised by such conclusions. "I seem to see primitive man inhaling the world through his hands," Focillon writes in his essay "In Praise of Hands," "stretching his fingers into a web to catch the imponderable." 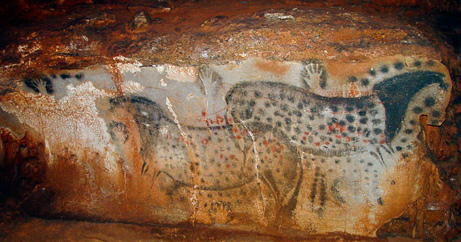 Hand stencils next to drawings of horses in the Peche Merl caves in southern France.

Focillon writes as if to explain the presence of hands as a kind of signature or sign of human presence and action on the world:

"As soon as man tries to intervene in the natural order in which he is subject, from the moment he begins to push a pointed instrument or a sharp edge into some hard material in order to split it and give it form, his primitive labor contains in itself its whole future development. The caveman carefully chipping the flint and fashioning needles out of bone astonishes me much more than the clever builder of machines. He is no longer activated by unknown forces; he can work on his own. Formerly, even in the recesses of the deepest cave, he remained on the surface of things; even when he broke up animal vertebrae or tree limbs, he did not penetrate, he had no access to meaning. The implement itself is no less remarkable than the use to which it is put. It is both a value and a result in itself. There it is, set off from the rest of the world, something new. Though a stone knife may have a cutting edge no sharper than that of a thin shell, it was not picked up by chance on some beach. It can be called the work of a new god, the product, indeed, the extension, of his hands." 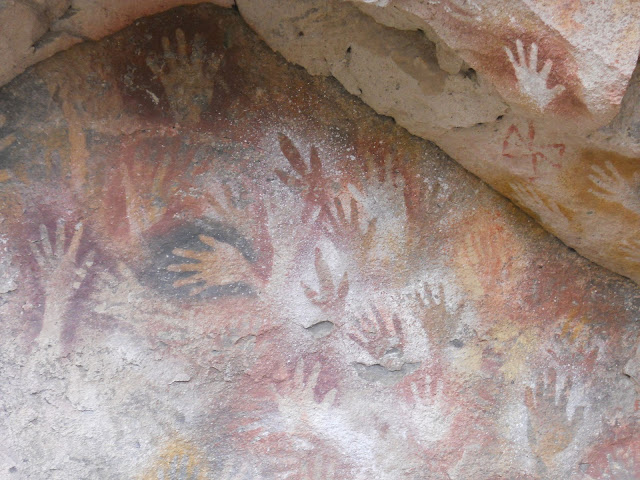 "What distinguishes dream from reality is that the dreamer cannot engender art, for his hands are asleep. Art is made by the hands. They are the instrument of creation, but even before that they are an organ of knowledge," Focillon writes."...In the artist's studio are to be found the hand's trials, experiments and divinations, the age-old memories of the human race which has not forgotten the privilege of working with its hands." 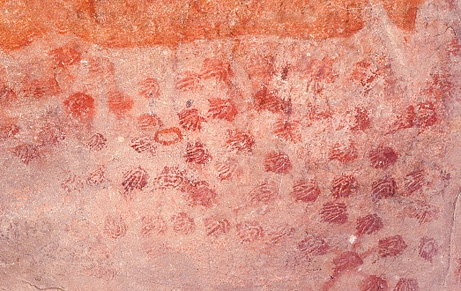 Hand print decorations in a cave in southern Africa.

See In Praise of Hands by Henri Focillon 1