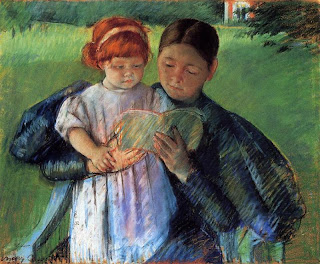 A fascinating international study shows that children who grow up in homes that have home libraries are much more likely to do well in school. The study encompassed 27 countries. “Home library size has a very substantial effect on educational attainment, even adjusting for parents’ education, father’s occupational status and other family background characteristics,” reports the study, recently published in the journal Research in Social Stratification and Mobility. “A child from a family rich in books is 19 percentage points more likely to complete university than a comparable child growing up without a home library.”

As noted by a report on the study by Tom Jacobs: "This effect holds true regardless of a nation’s wealth, culture or political system, but its intensity varies from country to country. In China, a child whose parents own 500 books will average 6.6 more years of education than a comparable child from a bookless home. In the U.S., the figure is 2.4 years — which is still highly significant when you consider it’s the difference between two years of college and a full four-year degree."

This research relates somewhat to my hunch that the higher the quality of books a child reads the more productive they may be in later life.

You can read the abstract of the home library study here, and I first learned about it here.
Posted by Linda at Wednesday, April 21, 2010 4 comments: 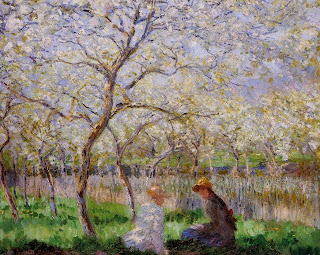 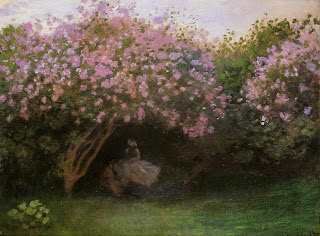 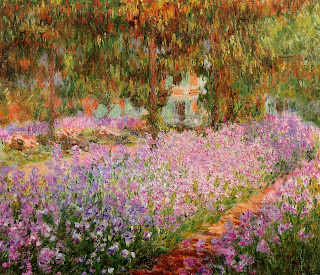 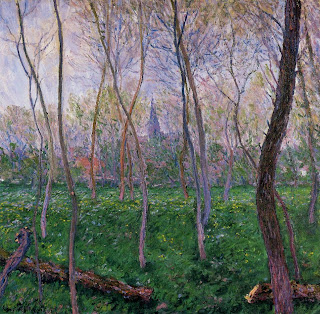 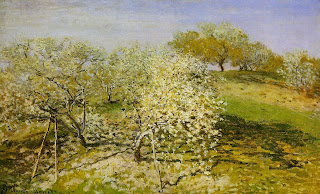 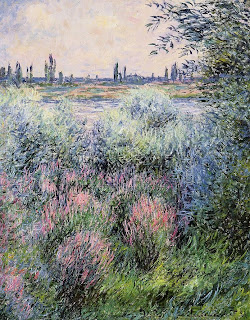 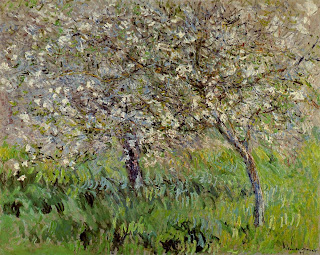 After back-to-back posts on bad sons and bad fathers, I think a switch in topic is definitely called for, so I turn to scientific research. I recently read Animals in Translation by Temple Grandin, an insightful book into the behavior of farm animals such as cows, horses, and chickens and of household pets, especially dogs. Grandin maintains that the visual perception of animals is different from that of adult human beings and closer to the visual perception of autistic people, such as herself.

The difference, she says, is that animals such as dogs and autistic individuals see all the details, whereas normal adults filter out a lot of visual stimuli and only perceive what they expect or are interested in. She cited an experiment in which both airplane pilots and ordinary people had to view a simulated air landing strip from the viewpoint of the pilot's cockpit as the plane was making a landing. When another plane suddenly emerged on the airstrip right in the path of the landing plane, non-pilots saw it, but the pilots did not, since they were not expecting it and were flying on automatic pilot, so to speak.

As I was reading this, my mind couldn't help but wander off to Dave Barry's classic column of November 23, 2003, in which he argues that men don't help clean house because they actually can't see the dirt. Now, it turns out, there is scientific research to hold up Barry's theory! As a public service for all harried house cleaners, here's the link to Barry's column. Have fun!
Posted by Linda at Sunday, April 11, 2010 1 comment:

City by the Sea

City by the Sea with Robert de Niro should perhaps be mandatory watching for all prospective fathers. The role of the father, especially for a boy, is so crucial that abandonment, as this film shows in painful realism, wreaks havoc with the life of the son left behind.

The story involves a detective in New York City (de Niro) who works on a murder case that eventually leads him to his own son, now a young man, whom he had abandoned long ago when he had divorced the boy’s mother. Left with a poor and demoralized woman, the son has since become a junkie, is in with a very wrong crowd, and is now, as the film opens, entrapped in a spiral of violence from which he is unlikely to escape. 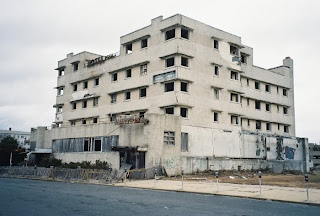 What makes the film unforgettably poignant is its setting: Asbury Park, New Jersey (called Long Beach in the film), where the son roams the streets. Here at the boardwalk by the sea―where we would normally conjure up images of vacations, family fun, beautiful sunrises, sand, children playing, families frolicking and laughing in the water—here lies a nearly abandoned city. Once proud hotels reduced to ruins and gigantic boardwalk fun parlors scarily empty—the haunts of very lost children and the evil-doers that prey on them.

Such can be the inside of the child abandoned by a father. 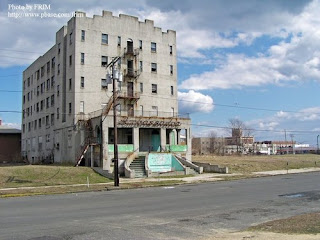 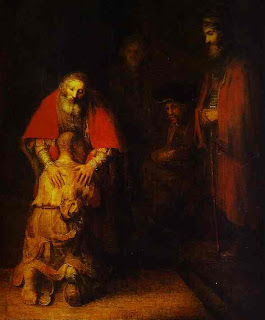 April 11 is Divine Mercy Sunday when the Chaplet of Divine Mercy is said at 3 o'clock in the afternoon. When I think of mercy the painting that comes to mind is Rembrandt's The Prodigal Son (above) (Luke 15:10-32), one of the most moving paintings in all of art.

Before this painting, Rembrandt had depicted the parable three times: 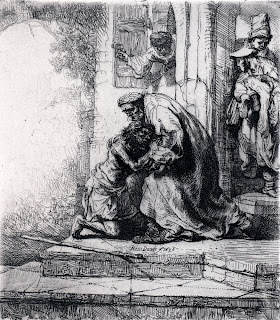 In this first etching, the emphasis is on the story in a stone setting with onlookers. A woman looks down in surprise from her window. The son is dirty and clutches his father. The medium of the etching encases the embrace of father and son in an equanimity of line with the setting. 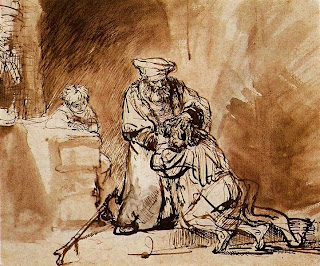 Here we see a reduction of the scene from the etching. Observers are now limited to one innocent boy looking upon the scene with both interest and compassion. The equanimity of line has been replaced with concentration on the relationship of the father and son. The father's expression is more precise, and we are pulled more deeply into the emotions of their reunion. 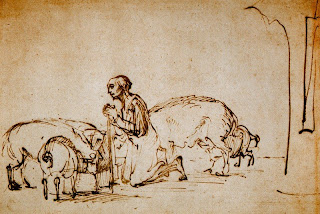 The Prodigal Son Among the Swine, 1645

Rembrandt draws the starving son among the swine, at the point of apprehension of his degraded state.

Finally, in the last depiction, painted in 1669 as his life was drawing to a close, we see the father and son not in profile but head on, their presence isolated from their surroundings and intensified with color. The father's face is less individualized, as is the son's. They have become universalized; the son is no longer anguished but expresses relief in total penitential submission. The slight tilt of the father's head and his hands on the back of his son express his forgiveness and total acceptance of his returned son. In this depiction, Rembrandt has painted the unseen: mercy itself.
Posted by Linda at Friday, April 09, 2010 No comments:

Best Wishes for a Joyful Easter 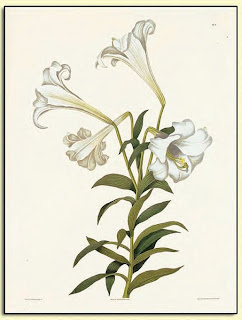