Fine Arts Friday: Kitchen Maid with the Supper at Emmaus

Kitchen Maid with the Supper at Emmaus by Diego Velazquez

This remarkable painting was painted by the great Spanish artist Diego Velazquez in 1618, when the painter was 19 years old. Here we see not simply a maid, but a young African woman who is most likely a slave, in a kitchen--the kitchen of the inn where two disciples and Christ have stopped for their evening meal.

As told in the Gospel of Luke 24:13-32, the disciples had not recognized Christ as they were walking together to Emmaus: "It happened, while they talked and questioned together, that Jesus himself came near, and went with them. But their eyes were kept from recognizing him." And as soon as they do recognize him during their Emmaus repast, Christ disappears: "When he had sat down at the table with them, he took the bread and gave thanks. Breaking it, he gave to them. Their eyes were opened, and they recognized him, and he vanished out of their sight."

Therefore, the painting depicts a moment before the disciples have recognized Christ. However, we may look at the stunned expression on the face of this young African slave. With one hand she grips a pitcher, which perhaps she has just brought from Christ's table. Perhaps she was about to wipe the table before her with the rag. But she is now in a state of arrested attention, her head turned slightly toward the window through which we see Christ. She is listening--intently--to Christ--in the painter's recollection of the words from Matthew 13: "Who hath ears, let him hear" and "They that hear shall live." 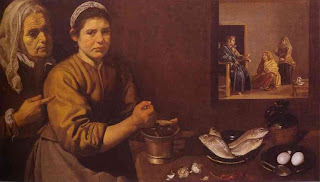 Christ in the House of Mary and Martha by Velazquez

Velazquez is deliberate in making an African maid the subject in his Emmaus painting. In Christ in the House of Mary and Martha painted in the same year, Velazquez also shows us the kitchen where a maid--clearly Spanish-born--is preparing food for Christ, whom we see with Mary ad Martha through a serving window. However, in this case, the maid is not listening to Christ. Rather, an older woman points to the window to draw her attention to the guest.

In this Emmaus painting, we see the African slave alone in the forefront. The text in Luke recalls the Last Supper and the Eucharist, as Christ breaks the bread and gives it to the two disciples. Velazquez could have painted the maid in the act of serving and placed her near Christ, as in Vermeer's Mary and Martha. But she alone is the major pictorial subject in recollection of Matthew 20:16: "So the last shall be first."

With this painting, Velazquez takes his stand on the raging debate in Spain during his time: Whether Spain, as a Christian country, had a right to enslave the Indians of the New World and to enslave Africans. Through his Kitchen Maid with the Supper at Emmaus, Velazquez declares that enslaved Africans have immortal souls and have ears that can hear Christ's Word. There is no moral justification for their enslavement, and if by misfortune they be enslaved, they yet have souls and, indeed, their lowly state makes them more open to the Word of Christ than even Christ's own disciples.
Posted by Linda at Saturday, September 27, 2008 No comments: