In Praise of Sewing 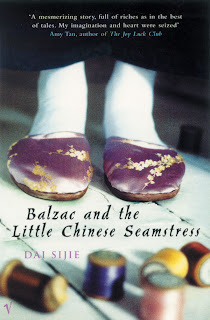 Over the weekend I very happily watched two movies that touch on sewing: Balzac and the Little Chinese Seamstress and Broderies (or Sequins).
Balzac and the Little Chinese Seamstress is based on the semi-autobiographical novel of the same name by Dai Sijie. It concerns two city youths who are sent to remote mountains to undergo re-education at the hands of the local peasantry during the Chinese Cultural Revolution. The little seamstress in question is the young granddaughter of the local tailor, who owns a 19th-century sewing machine. Now his granddaughter makes the clothes. Under the influence of a smuggled novel by Balzac, which one of the boys reads to her at night, she begins changing her output, adding "bourgeois" embellishments, such as bows and flounces, to the drab Cultural Revolution garb. The sewing machine also came in for a strange and funny use. The seamstress's skills in sewing appear to be important in giving the seamstress the self-confidence to be so open to what the two city boys brought and had to offer. She soaked up Balzac and the music on violin that one of the boys had brought and changed her life and theirs. I loved both the book and the movie. The movie seems to be a French production but is in Chinese with English subtitles. 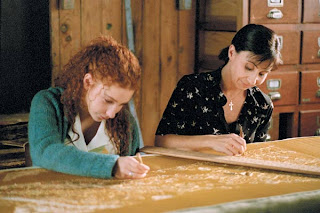 The young heroine of Broderies helps embroider a dress in the workshop of her friend and employer.

Broderies is about a 17-year-old girl in a provincial French town who goes to considerable lengths to produce artistic works in embroidery on her own. She is in a personal crisis because she is pregnant with no prospect of help from the unknown (to us) father. In desperation, she seeks and finds work with a woman in the town who is bereaved over the loss of her son and who also produces from her house gorgeous embroidery for the haute couture designers in Paris. Despite a gratuitous sex scene, the film is a sensitive portrayal of two women under considerable pressure, both of whom are dedicated to creating beauty, and the way in which this dedication binds them and strengthens them. I heard about this movie from reading Yarnstorm, and I am glad I searched it out and watched it. It is visually beautiful and offers another peek at the highly skilled work that goes on far behind the scenes to produce the creations of Parisian high fashion.
There is also a French movie called The Lacemaker made in 1977, which according to a reviewer of Broderies, has a lot of scenes of sewing, but I have not been able to get a hold of this movie at a reasonable price.
Posted by Linda at Monday, January 28, 2008 No comments: 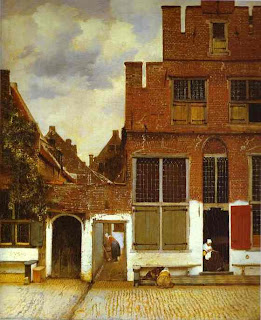 A Street in Delft by Jan Vermeer, painted 1657-58. The lady in the alleyway has a broom as if she had just finished sweeping the passage between the two houses.

I realized that when I was searching the Web for paintings of women housecleaning and came up with nothing, that I had forgotten to check in on the Dutch genre painters of the 17th century Golden Age of Dutch art. Sure enough, we find here paintings of ladies sweeping (in particular). It is a fascinating question as to the cultural shifts in Holland at the time that made genre painting possible--many beautiful paintings of the lovely and neat interiors of Dutch homes and the domestic activities of women and children. 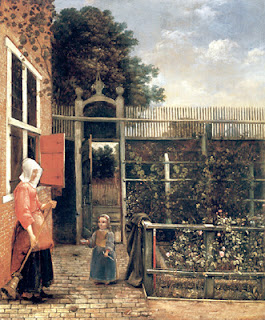 Woman with a Child Blowing Bubbles in the Garden by Henrik van der Burch, 1660 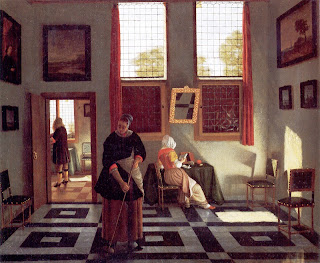 A Woman Reading a Letter and a Woman Sweeping by Pieter Jansessens Elinga (1623-82--no date is given for the painting). For a time, Mr. Elinga with his wife and four children lived down the street from Rembrandt.

To me this last painting suggests the theme of Mary and Martha. The two women have nearly identical dress; the sweeping lady is larger and more prominent but in the shadows, while the reader is in the area of the painting that shows natural light. The house looks very clean and tidy, to be sure.

In case you are interested, I found the latter two paintings at The Essential Vermeer, a treasure trove of information on this great painter and of paintings by and information about his contemporaries.
Posted by Linda at Monday, January 28, 2008 1 comment:

A Tiny Step with a Little Bag 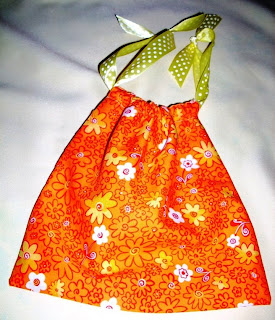 Here is a small drawstring bag I made for a little friend of mine. This was my first post-Christmas sewing effort. I did it from a tutorial at Happy Things, which very generously has a series of tutorials on drawstring bags for beginners (definitely me) and also on quilting. Thank you very much, Happy Things. I messed up the top since I did not follow the measurements in the tutorial, but the bag still works. I love the fabric, and I am glad that I lined it, because it makes the bag more substantial and also because it is more cheerful. Now I am going to fill it with it fun little things for my friend. I don't know if she will like it, but I'm having fun! 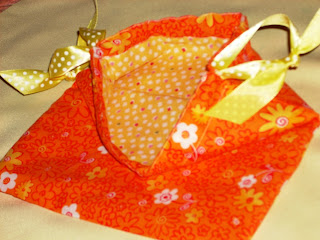 The book Cold Sassy Tree briefly discusses the variations in housecleaning in the North and the South of the U.S. According to Cold Sassy's author, Southern ladies abided by seasonal spring and fall deep cleaning, whereas Northern ladies did the following: the entire house was cleaned each week and in that cleaning, one room was chosen for deep cleaning. I don't know if this is true; surely Marilla of Anne of Green Gables was a formidable housecleaner. The most cleaning I have ever heard of was my mother's best friend's mother, who dusted, mopped, and vacuumed her entire house everyday--living in West, Chester, Pennsylvania. 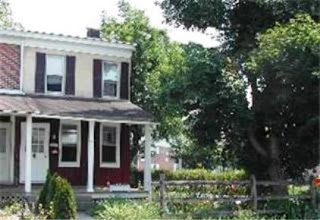 She was a very warm and jolly lady--by no means a shrew, despite her cleaning zeal. I used to visit her daughter's house--my Aunt Jane--as a little girl and always admired it. It was a duplex something like the house in the picture but with a red brick walk and sidewalk and with a wrought-iron fence. The kitchen was the most impressive room, because it was always clean as a whistle AND the kitchen dining table was always set for the next meal!
Posted by Linda at Saturday, January 19, 2008 No comments: 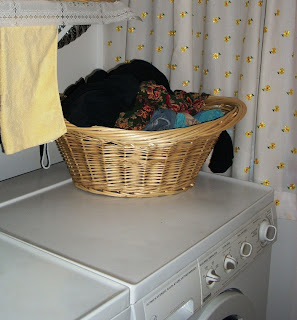 The curtains are washed and ironed, and the floor under the washer is clean.

Ever since I moved into my house in 1999, January has been the month in which I set my house in order--cleaning out all the drawers and closets. This year, I also worked on deep cleaning so that the house has a baseline of order and cleanliness. It seems important to know what is there and what can be of use in which way. I have always found that after a house is deep-cleaned, it is very easy to take care of day to day. If I had the time I would deep-clean every 3 months. Surely once a year is not enough. I am scandalized by the amount of waste that I accumulate and cannot afford and by the amount of dirt I find.
It seems that I am not the only one who looks to this time of year to reorganize. A fair percentage of blogs that I have read over the first two weeks of January show that women everywhere--in the United States and abroad--are doing the same thing. I guess it comes naturally. I was never aware of any old housewives' mantra of imposing order and cleanliness in January--"spring cleaning" is what I always heard of, derived from the necessity to get all the oily grit off of everything after heat was no longer needed. In my cycle of seasons, our forced enclosure during winter offers a great time for deep cleaning--snow days are my favorite deep clean days. I love this time of year.
I have wanted to write about this cycle of housecleaning and order for about a week now, and today I went to my folder of paintings of "Women Working" to find a painting to illustrate it. Nada. Then I went to the Internet and googled away and came up with Nada. Yes, there are many paintings of women sewing, caring for children, cooking, milking cows, gathering eggs, shopping, and even doing the laundry--but not cleaning.
Is this an activity too trivial for art? The fact is that during the period in which such paintings would have been done--say from Chardin onwards through the 1920s, most of this work, even in a middle-class household, was done by maids. 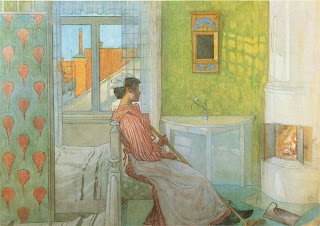 For instance, Carl Larsson who created many paintings celebrating the domestic activities of the women in his home--including one of his wife shelling peas--does not seem to have painted them housecleaning. However, he does paint this one (above) of a maid resting after a thorough sweeping of a room. I have also found two illustrations of women cleaning in a book called The Medieval Woman: Illuminated Book of Days.
In contrast to sewing and cooking, housecleaning has a relatively poor reputation. I recall a story of Auguste Renoir's boyhood. Mrs. Renoir was a fastidious housekeeper, and one day, when her husband came in from the fields, she forbade him from entering, because she had just scrubbed the floor. He turned on his heels and never came back. There are many other stories of how women who are dedicated to keeping their homes clean are looked upon as shrews. In the worst case, there is the image of the witch with her broom. In more modern times, thanks to Betty Friedan and her followers, housecleaning is deemed total drudgery and demeaning work--something that evidently should be relegated to the untouchable class of India. 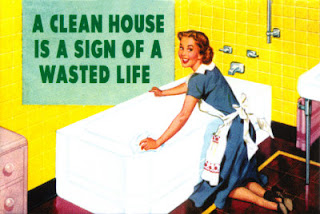 We are beholden to those of our mothers who wanted to keep a beautiful home (no matter how much or how little money they had) and to Martha Stewart and also to Cheryl Mendelson (and her wonderful and very informative book, Home Comforts: The Art and Science of Keeping House) to a new understanding that housekeeping is a gratifying and civilizing activity. This idea falls well within the Christian tradition--and surely within the Judaic tradition with its emphasis on cleanliness. In looking for a painting of a woman cleaning, I searched for portraits of Saint Martha, the saint who would most be identified with housekeepers, and this is what I found:
"Despite her reputation as a domestic saint, invoked for help cooking, running a household and maintaining the family peace, she's also a dragon-taming saint," and in her portraits she is always portrayed as having tamed a dragon who lays at her feet. Such is the civilizing achievement of Saint Martha. 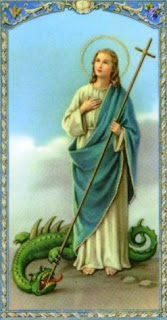 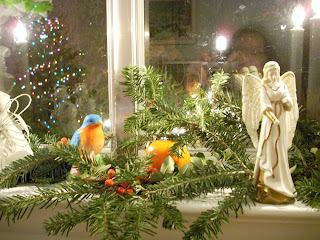