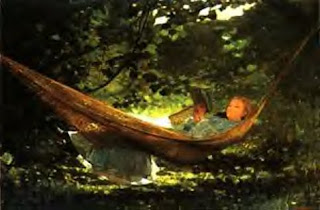 Here I am reading about housework rather than doing it. (Actually, this is Sunlight and Shadow by Winslow Homer, 1872)

In case you missed the suggestions for good books that bring in scenes of women's domestic work and homemaking that are in the comments to the post of August 19, here are your suggestions:

Thank you! I should have done this in the spring before vacations! Ah well, we are heading into those nice cool winter months that also invite reading.
Posted by Linda at Tuesday, September 22, 2009 8 comments: 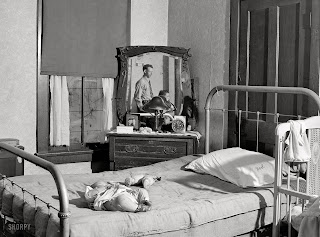 This picture from Shorpy is captioned: "January 1940. 'Family living in a 'crackerbox' slum tenement in Beaver Falls, Pennsylvania.'" The family is poor and the bedding is threadbare, but the room is clean. The man we see reflected in the mirror wears a tie. This is a poor family but not one lacking in hope or dignity.
Posted by Linda at Monday, September 21, 2009 1 comment:

The Art of Subtraction 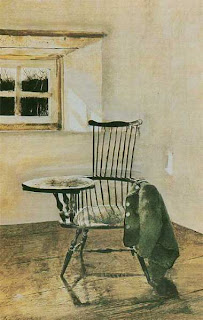 The Writing Chair by Andrew Wyeth.

My mother was an artist of subtraction. When she died, I was astounded to find that there really wasn't any junk in the entire house. There were mementos, important papers, and various objects, and many photographs of loved ones on display and in boxes, but nothing superfluous, no redundancy. This art of restraint was part of her aesthetic and showed itself in her interior decorating, which was based on the artful arrangement of high-quality objects and furniture--nothing was added, except always a touch of whimsy or the unexpected.

I am far more greedy, and although I do not like clutter, am far more prone to compromising to add in objects I have affection for. I love paintings and heaven for me might be looking at all my favorite paintings all at once--not something I can achieve in my living room. But at this point in time I feel a need for a more streamlined and bare essential existence, wanting to know exactly what object is there and what its purpose is, and not have to think about anything extraneous. Note here that I, as opposed to so many, have the luxury of discarding. 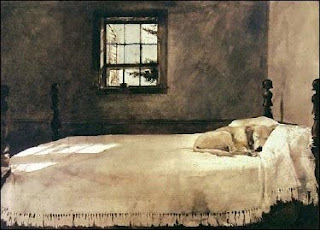 This is not to say that I embrace the streamlined aesthetic of modernity. Given the right use of color, this aesthetic might be visually appealing in a magazine, but I would never want to live there. The trick seems to be striking the balance between a simplified aesthetic and a coziness that is home.

This is probably why at this point in time I feel so drawn to the art of Andrew Wyeth, a master of the art of subtraction. His interiors seem to be stripped to the barest essentials of the soul. Nothing is extraneous. Every object is drenched in meaning and speaks of a history, a history we could never put in words but we can feel the weight of it. This is the beauty of his art: subtraction, and light. 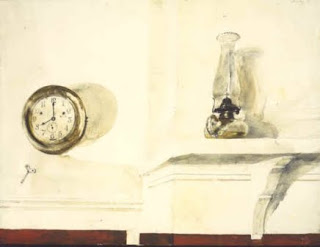 Ship's Clock by Andrew Wyeth.
Posted by Linda at Wednesday, September 16, 2009 No comments: 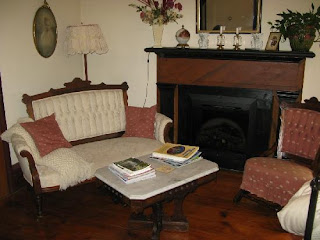 "Mrs. Blackett was one who knew the uses of a parlor."

Upon rereading Sarah Orne Jewett's The Country of Pointed Firs, I was intrigued by the description of a "best room." The writer goes with a friend to visit the friend's mother, an elderly Mrs. Blackett, on a remote island off the coast of Maine.

"The front door stood hospitably open in expectation of company, and an orderly vine grew at each side, but our path led to the kitchen door at the house-end, ... "It seems kind o' formal coming' in this way,' said Mrs. Todd impulsively, as we passed the flowers and came to the front doorstep; but she was mindful of the proprieties and walked us into the best room on the left. Mrs. Todd ... loomed larger than ever in the little old-fashioned best room, with its few pieces of good furniture and pictures of national interest.... There were empty glass lamps and crystallized bouquests of grass and some fine shells on the narrow mantelpiece." 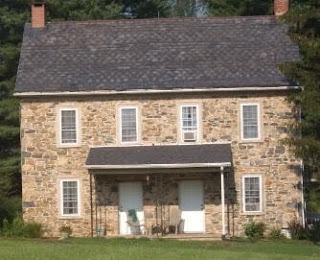 A country house typical of south-central Pennsylvania, with two front doors, side by side: one for guests and one for the family.

Indeed, in southern central Pennsylvania, it is common to see older homes with two front doors, a tradition among the German families of the area, although not one brought from their original homeland. One door leads to the kitchen and "family room"--where the family conducts its business. The other door leads to the parlor--or best room--which is reserved for guests. This offers two ways of honoring those who are not members of the immediate family: the guest is honored, as in The Country of Pointed Firs, by being ushered into the "best room" but the closeness of the friendship may be honored by bringing the guest eventually into the kitchen and family area.

This tradition was lost in the early decades of the 20th century, when the house size shrunk due to the loss of the labor force of hired domestics. The bungalow, the post-war rambler, rowhouses, the cape cod, and the duplex often have no such differentiation. My first childhood home was a bungalow, where the front door led right into the living room. The remaining rooms on the first floor were the dining room, kitchen, and a very small study. In the duplex I lived in with my grandparents, the front door led straight into the living room, to the dining room, to the kitchen in the back where there was a breakfast nook. (My grandparents used the nook strictly for daytime dining except for Sunday supper--all dinners were served in the dining room.)

In the latter part of the 20th century, the "den" and then the "family room" emerged as back rooms in the house, with the living room and dining room reserved for guests. In my mother's house, family members--mostly my father--used the living room for reading, but otherwise both the living room and dining room were reserved for guests, the breakfast nook in the kitchen serving for all family meals, including dinner. The idea of doing homework on the dining room table was shocking--we never touched the dining room. Close neighbors entered the house through the back kitchen door, as did frequently visiting friends. Extended family relatives and infrequent guests arrived through the front door. The family worked and played mostly in the back of the house, in two adjoining rooms where the TV--our modern-day hearth--resided.

For their growing family, our next-door neighbors built a family dining room and tv room coming off an open kitchen in the back of their home. In this layout, the mother could have her eyes on her children from the vantage of the centered kitchen--very convenient. Although I have popped over to their house many times, I have never laid eyes on their "best room" dining and living rooms. 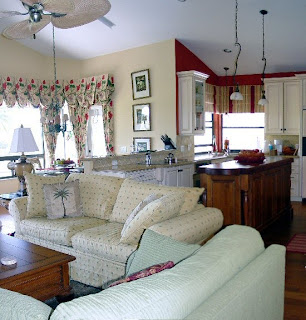 The modern kitchen onto the family room--a very nice arrangement that allows the mother to keep track of children and enables comfortable discussion with the cook. This area is separated from the "best rooms," which are usually in the front of the house.

The distinction between the "best rooms" and the family rooms is now very pronounced in much home building. In townhouses, there may be a bumpout for a small family room off the kitchen, and family room space in the basement seems to be mandatory. Teenagers especially like that arrangement since it affords them the greatest privacy. In most single-family homes, a family room--often with a fireplace--extends off the kitchen.

However, it has been noted that at parties, everyone gravitates toward the kitchen and that the kitchen is often the most social part of the house. In recognition of this, for instance, my brother designed his home so that the kitchen extends along the living room with a bar open to the living room, so guests can seat themselves and chat with the cook. This is the great room concept that is also very common on vacation homes, where everyone is gathering together to have fun. I have also come across townhouses that lead from a garage floor up the stairs and straight into the kitchen, with the dining room and living room on either side.

Gravitating toward the kitchen was also true for Mrs. Blackett's house in Maine:

We were all moving toward the kitchen, as if by common instinct. The best room was too suggestive of serious occasions, and the shades were all pulled down to shut out the summer light and air. It was indeed a tribute to Society to find a room set apart for her behests out there on so apparently neighborless and remote an island. Afternoon visits and evening festivals must be few in such a bleak situation at certain seasons of the year, but Mrs. Blackett was of those who do not live to themselves, and who have long since passed the line that divides mere self-concern from a valued share in whatever Society can give and take. There were those of her neighbors who never had taken the trouble to furnish a best room, but Mrs. Blackett was one who knew the uses of a parlor.

'Yes, do come right out into the old kitchen; I shan't make any stranger of you," she invited us pleasantly, after we had been properly received in the room appointed to formality.