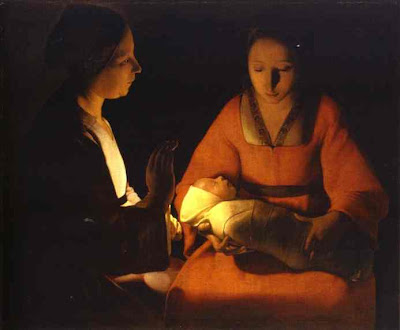 "What we shall be asked to give is our flesh and blood,
our daily life -- our thoughts, our service to one another,
our affections and loves, our words, our intellect, our waking, working, and sleeping,
our ordinary human joys and sorrows -- to God.
To surrender all that we are, as we are, to the Spirit of Love
in order that our lives may bear Christ into the world -- that is what we shall be asked." 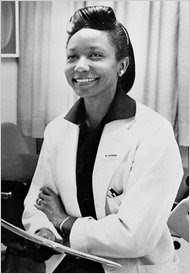 “I am at once a physician, a citizen, and a woman, and I am not willing to stand aside and allow the concept of expendable human lives to turn this great land of ours into just another exclusive reservation where only the perfect, the privileged, and the planned have the right to live."

See Tea at Trianon for a discussion of this great American.
Posted by Linda at Monday, December 27, 2010 No comments:

Labels: Inspirations from the Present 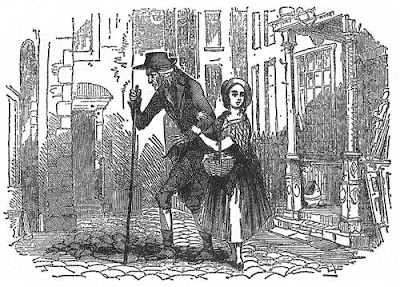 "The pilgrimage begins." Two wayfaring strangers, Nell and her grandfather, from The Old Curiosity Shop.

Recently, I picked up The Old Curiosity Shop by Charles Dickens, where I had left off a few years ago at page 265, and after looking at the book's first sentence--"Night is generally my time for walking."--decided to start again at the beginning. I am glad that I did, because there is no haziness in my head as the story of Nell and her grandfather unfolds before me in vivid color.

When I came to the descriptions in chapter 15 of Nell and her grandfather working their way toward the outskirts of London through the night into dawn and how life slowly awakens in the streets, I was surprised by the beauty of the prose and then saddened that so few people read Dickens today and that his books are often missing form high school reading lists. Although Dickens' descriptions do not make you feel as if you are in the scene, as with Flaubert, they are so rich in the minuteness of telling detail, the lush depiction of human behavior, and evocations of mood, that, in comparison, the descriptions I have read recently in late 20th century American literature seem paltry and starved in comparison.

So I was happy when I found Sunday in the Wall Street Journal that Oprah Winfrey has chosen two Dickens novels--A Tale of Two Cities and Great Expectations--for her book club. I think the more that people read Dickens the better. Especially, I hope that children in their early teens read Dickens. Here are some of my reasons:

Reading Dickens takes us into a different world, and there is nothing wrong with that. Although the torments of poverty, especially for children, are depicted starkly and that may not be our experience, children in such straits are not far away, even in America. Although the Victorian morality may differ from today's standards, it is a morality that is recognizable to almost anyone. In short, there is nothing so vastly different in Dickens' world from ours that makes any of Dickens' world irrelevant.

Within this world, we get a glimpse of just about everything--we see extraordinary goodness and kindness, we see eccentricity, we see hilarity, we see evil, and all shades in between. We see this in great detail. It is not just that Dickens paints an unforgettable character. Like a great painter or a great actor, he reports the character's gestures--the tip of the head, the pause before entering the door, the scratching of the nose, the deep bow--all at the service to the moment at hand. Sometimes the narration is so nuanced, we feel that if we stretched our hand from the pages of the book, we might bump right into a character! 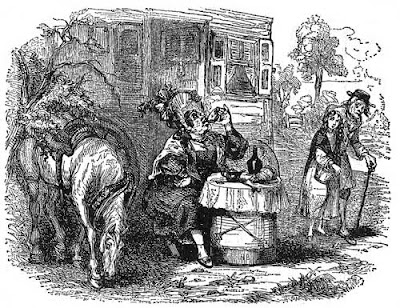 Mrs. Jarley, queen of the waxworks, a kind-hearted soul who regularly quenches her thirst from a "suspicious bottle."--The Old Curiosity Shop

This embracing of the distinctness of human beings--no matter how brief the encounter--let's us know that Dickens loves everything about the world he has created--even its evil characters. Life is the subject and within that circumference, everyone, good and bad, has something to contribute to the story, to guiding the reader through the glories and pitfalls of human existence.

Hence, I find in Dickens a benign introduction for young teens into a world that is far more complex than the world in the mind, say, of a sixth grader. Here in Dickens' world, we meet all kinds of gradations, even within the same character--as with Nell's grandfather, a kind-hearted man devoted to his grandchild yet ready to squander every penny away in his gambling addiction, which brings her nothing but torment. We see the consequences of action and inaction; the intended and unintended consequences of cruelty and of kindness; and the great inability of everyone to control their lives as they like.

I am reminded that Anne Frank's father read Dickens constantly during the years in their hiding place, a time when Anne was in her early teens, and regaled everyone with a reading of The Pickwick Papers. Love of life is Dickens' central theme, and life, as Dickens' books, has many lessons to teach.

In David Copperfield, Dickens portrays his vision of the best life has to offer: love within a safe and secure family in a home that expresses this love in gardens, neatness, and orderliness. I am not deterred by the fact that Dickens forswore his own wife for a far younger woman; I am not recommending that young teens read Dickens' biography; many writers paint their dreams, not their far frailer realities. But when David Copperfield is a young boy living with his beloved mother and Peggoty, and at Peggoty's brother's home on the beach, we see that the close-knit family is the center, the very fire, of life--a life all children deserve. 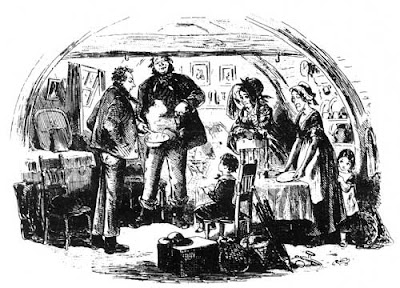 "I am hospitably received by Mr. Peggoty." -- David Copperfield
Posted by Linda at Monday, December 13, 2010 No comments:

Some of you may remember my disgruntled post of a while back titled: "Where's the Milkman?" I noted that my mother, a suburban stay-at-home mom, had practically a parade coming to her own home every week: the milkman, the bread man, and the egg man, and that now, when many wives and mothers are working, this is the kind of service we need more than ever, but it's not there!

Now, I am happy to report I have a milkman! I was driving down the street where I live in northern Virginia about two months ago, and I saw a big truck in front of me, which said "South Mountain Creamery -- Milk Delivery." What! I noted the url on the truck and raced to the Web as soon as I got home to look it up.

Sure enough, some smart folks in rural Maryland are delivering milk and other necessities to your doorstep once a week. You can go online to change your order or to skip deliveries if you are going out of town. Along with milk, eggs, and bread,South Creamery delivers local jams and preserves and other condiments, their own yogurt and assorted dairy products, bacon and meats, and other specialties. The prices and the delivery charge are all reasonable. 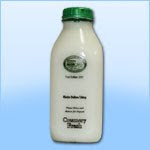 I signed up for a weekly delivery of a quart of skim milk (IN GLASS BOTTLES--hurray!), a loaf of honey wheat bread, and a dozen eggs. This week, I also ordered some jam. They come every Friday, and I just set my cooler outside.
I hate going to the food store, and I figure that in a pinch I can scramble up a repast with these items. Thank you so much, South Mountain Creamery, which is getting busier by the week.

In today's delivery I also received a Season's Greeting card, signed by the owner and underneath, it read:
"Milkman"