Winter exposes the hawks to our sight. As I was walking around Lake Newport yesterday I saw something jumping from the ground leaping upward. I thought perhaps it was a dog, but as we, my dog and I, got closer we saw the form on top of the wall--a large bird, a hawk it became clear as we walked toward it. The hawk then flew over to a nearby tree (see inside the circle below).  As I was taking the picture on my iPhone, I looked away to fiddle with something and when I looked up, I thought he had flown off, but then I looked closer and he was still there blended with the brown tree branches and black shadows.

Then he flew to a nearby tree where I could catch his profile. 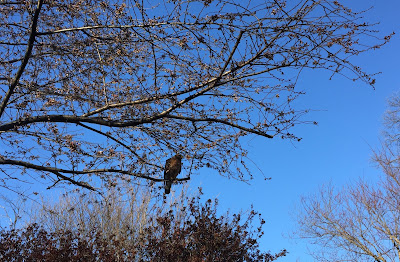 And after a bit, either in annoyance with us or with not finding prey, he flew off toward the lake. 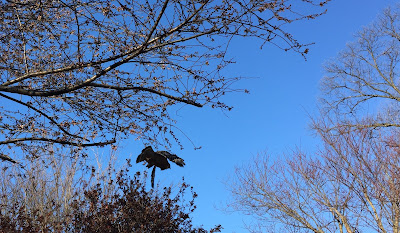 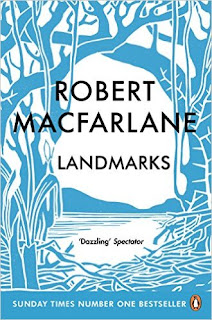 Robert Macfarlane's 2015 book, Landmarks, was the most important and most absorbing book I read in 2016. A writer, traveler, and hiker, Macfarlane was compelled to take up his pen for Landmarks by his perusal of the Oxford Junior Dictionary, in which "a sharp-eyed reader noticed that there had been a culling of words concerning nature."

"When the head of children's dictionaries at OUP was asked why the decision had been taken to delete those 'nature words,' she explained that the dictionary needed to reflect the consensus experience of modern-day childhood. 'When you look back at older versions of dictionaries, there were lots of examples of flowers for instance,' she said. 'that was because many children lived in semi-rural environments and saw the seasons. Nowadays, the environment has changed.' There is a realism in her response--but also an alarming acceptance of the idea that children might no longer see the seasons, or that the rural environment might be so unproblematically disposable.

"The substitutions made in the dictionary--the outdoor and the natural being displaced by the indoor and the virtual--are a small but significant symptom of the simulated life we increasingly live."

From this opening, Macfarlane examines the life and work of nine landscape writers and naturalists, one chapter per writer, with a glossary attached to the end of each chapter of words or phrases in English, Gaelic, Welsh, and regional lexicons that describe detailed aspects of that landscape.

The underlying thesis is that if we forget or bury the words that we have for the world around us--a religious person would say, "the world that God has given us"--then we will lose our relationship to that world. Macfarlane does not seek to explore the consequences of that loss of connection. His book rather invites us to reconnect.

The glossaries bring to the surface the far more intimate relationship that our forebears had with their natural surroundings. To give some examples: snaw grimet--color of the ground when lying snow is partly melted (Shetland); scailp--cleft or fissure; sheltering place beneath a rock (Irish); glumag--deep pool in a river (Gaelic); fub--long withered grass on old pastures or meadows (Galloway); and na luin--fast-moving heat-haze on the moor (Gaelic).

Aside from stories and writings of the landscape hero or heroine of each chapter, Macfarlane points us to other literature or discoveries about the landscape in question, so that the book acts as an annotated bibliography--signposts if we would like to take up the journey. 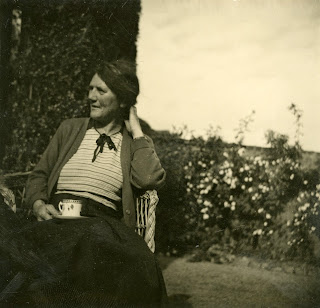 Nan Shepherd (1893-1981), a lecturer in English, writer, and constant hiker of the Cairngorm Mountains of Scotland, which she wondrously describes in The Living Mountain. 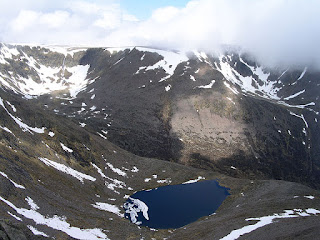 I had the added pleasure of reading this book while spending a week in the southern end of the Outer Banks of North Carolina, a stretch of seashore with few urbanized distractions. It was the perfect place. I could switch back and forth from watching the ocean and sun and water and poking around to identify the sand dune vegetation or pick up shells and pebbles, to reading about other landscapes written about in Macfarlane's beautiful and highly informative prose. (Keep a dictionary close at hand.)

Macfarlane's book not only opened up a new world of thinking about our relationship to God's universe.  It also helped me to see--to more easily apprehend the beauty offered to us outside when we escape, however briefly for a walk, from our virtual man-made confines.
Posted by Linda at Saturday, March 04, 2017 No comments:


You can see that it's the wind that makes the water sparkle. Without the wind, the sun's reflection is a circumscribed circle of light. When the wind comes up, the sunlight is caught in the tops of the many waves racing across the water's surface.
Posted by Linda at Saturday, March 04, 2017 No comments: