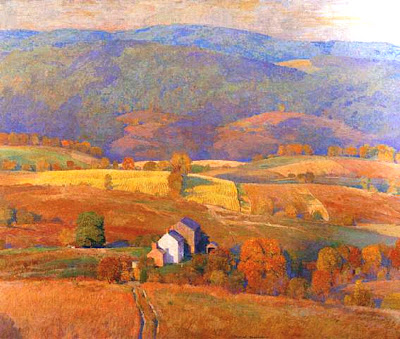 Praise God, from Whom all blessings flow;
Praise Him, all creatures here below;
Praise Him above, ye heavenly host;
Praise Father, Son, and Holy Ghost.
Posted by Linda at Wednesday, November 21, 2012 1 comment: 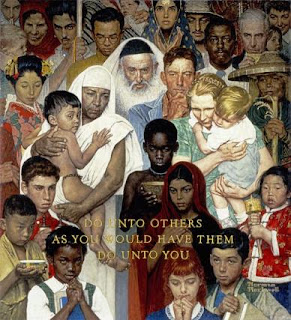 The Golden Rule by Norman Rockwell

In today's Wall Street Journal today Laura Kreutzer, assistant managing editor of private equity in the newsletter group at Dow Jones, writes about how she has a hard time convincing her seven-year-old daughter to perform acts of civic-minded charity. When her Girl Scout troop was planning to help with a neighborhood cleanup, her daughter wanted nothing to do with it. "Although we have tried to raise Neva to be kind to others, I don't think we've done enough to instill a sense of commitment to the community around her. I don't necessarily need to raise the next Mother Teresa, but I also don't want to raise the next Gordon Gekko."

After discussing this conundrum with her husband and a friend, Ms. Kreutzer decides that "we are going to try to do a better job of getting the family active in community-service activities. For starters, we plan to contribute to local relief efforts for areas of the Northeast, including our own state, hardest hit by the recent hurricane. As the holidays approach, I'm also signing us up for a local charity drive that provides clothing and other items for people in need."

I applaud Ms. Kreutzer for trying to induce her child to be less selfish and for providing a role model for giving to the community, but I am deeply saddened by the paucity of intellectual and emotional equipment she has to do the job of inducing charity in her daughter. Ms. Kreutzer makes no reference to religion of any kind. Without access to the rich mine of religious thought that links individual acts of charity and goodness to the goodness of the universe as created by a loving Father, Ms. Kreutzer is left encouraging the abstraction of civic duty. To the question of Why, she has no real explanation and takes the option of offering carrots to reward charitable behavior.

But charity for the sake of a reward, at least in this world, is not the point of charity in the Judeo-Christian tradition, one of the bedrocks upon which our civilization was founded. In a Christian household, for example, at a very early age one learns the Golden Rule--do unto others as you would have others do unto you. Embedded in this rule is the assumption that each individual person is made in the living image of God. Love thy neighbor as thyself. We have the story of the Good Samaritan as an example of what being a good neighbor means and of who the neighbor is--the stranger lying on the side of the road. We have Christ saying to Peter, "If you love me, feed my sheep."  This Christian emphasis on charity was rooted in Judaism. 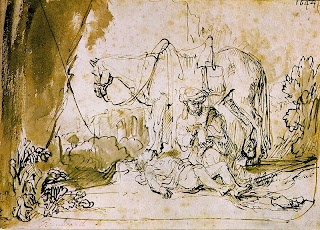 The Good Samaritan by Rembrandt van Rijn, 1644--the neighbor is the stranger lying on the side of the road.

For this reason, within Judeo-Christian culture, young children are taught that they must share their toys, that being "selfish" is not a good, and are brought into habits of charitable giving. This is not because our parents simply want us to be this way, but, we are taught, because this is the way in which we take our place as a contributing part of God's moral order of the universe. This is the way we participate in God's love, how we return His love. Love of God and of others is the force within us that compels charity.

There is nothing unscientific about this view. Charity, as Ms. Kreutzer recognizes, is necessary for the cohesion of society. A society which loses the concept of charity as a norm runs the grave risk of producing psychopaths and of human beings for whom "the other" as a concrete being like oneself, and not a utopian abstraction,  is a nonexistent. Charity is essential to nurturing the capacity for empathy, without which our society descends into increasingly harsh cruelty.

Ms. Kreutzer's article makes me fear that, without religion--now considered by so many as irrelevant, retrograde, and unscientific--our civilization is skating on very thin ice indeed.
Posted by Linda at Sunday, November 11, 2012 No comments: