Good Book in a Small Package: Lillian Smith's Memory of a Large Christmas 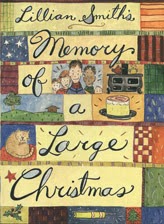 It won't take you but an evening to read Lillian Smith's Memory of a Large Christmas, but it will be a memorable one. A writer of the South, Smith penned this short memoir in 1962, six years before her death. It's about Christmases with her family--she was the seventh of nine children. What makes the book memorable are her hilarious stories--escapades and tricks she and her brothers and sisters played--and the character of her parents, particularly her father.

When the memoir begins, Mr. Smith is a prosperous owner of factories and farms and a prominent man of Smith's home town, Jasper, Florida. But in 1915 he suffered severe business losses and moved with his family to acreage he had previously bought in the mountains near Clayton, Georgia. Here he established a summer camp for children, which Smith later ran to bring in income for herself and her ill and widowed mother.

At the time of the "large Christmas" that Smith relates, the family in Georgia was never sure where it's next meal was coming from. But poverty did not hamper her father, or her mother from going along with him, to invite a chain gang that he seen down the road on Christmas Day for a Christmas dinner at the Smith home. Whether rich in Florida or poor in Georgia, as Smith recounts it, her father was as ebullient as ever--boosted in spirit by his devotion to Christianity and to his duty to other human beings. He had passed the chain gang on the side of the road --they needed a Christmas dinner,  and he offered it. Along with their guards, they gladly assented, and Smith and her mother and brothers and sisters found and cooked enough food to make it a delectable meal for all.

From reading Memory of a Large Christmas, it is not hard to understand why Lillian Smith became one of the earliest white Southern writers to speak out against racial segregation, writing Killers of the Dream, a series of essays against the laws of the Jim Crow South in 1949, before the civil rights movement burst into the national consciousness with the 1954 Supreme Court ruling against school segregation and the 1955 Montgomery bus boycott and at a time when a white person would be scorned for disloyalty to Jim Crow. She continued to write about civil rights until her death in 1968.

As Good as Its Cover

I am happy to report that this book lived up to its cover, which is a relief  since that's why I bought it last February, and then I read it in December. A compendium of stories by writers such as Charles Dickens, Anthony Trollope, John Cheever, Evelyn Waugh, and Willa Cather, among others, can't possibly go wrong. One of my favorites was Cather's "A Burglar's Christmas" with its ending that stands before our eyes like a bejeweled Christmas ornament. Cather writes about the threads that bind us to eternity like no other American writer I know.

Although I had read Truman Capote's "A Christmas Memory," I found myself in near grief by the end of it--but his story reminds us that grief is rooted in love and celebration. 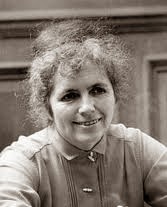 This collection gave me the opportunity to meet Grace Paley (1922-2007), a writer I not known of. Her "The Loudest Voice" (1959) of how a Jewish girl growing up in New York and her parents think about her participation in the school Christmas pageant was a perfect pointer to the survival of the Christmas spirit in our holiday season of today. For after all, as Paley's little girl thinks to herself on her way to sleep the night of the pageant, "I was happy. I fell asleep at once. I had prayed for everybody: my talking family, cousins far away, passersby, and all the lonesome Christians. I expected to be heard. My voice was certainly the loudest."

Grace Paley
Posted by Linda at Thursday, January 02, 2014 No comments: