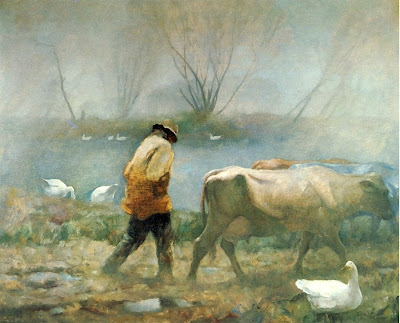 The rains have turned the grass dark green here in Virginia, but we pray for all those who have been devastated by the storms in the South and Midwest. May God bless you and keep you.
Posted by Linda at Thursday, April 28, 2011 No comments:

Where Did Porches Go? 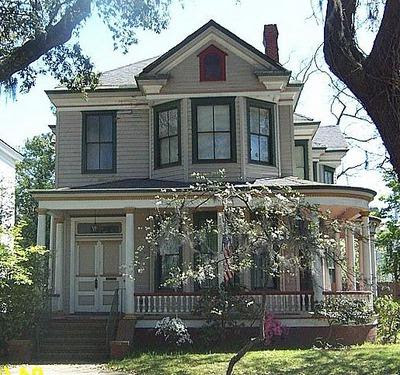 Wisteria adorns this beautiful wrap-around porch with round columns.

Now that summer will soon be upon us, there is no time to lose to think about outdoor living space, which brings me to the topic of the porch. Time was that most new homes came with porches, no matter the size of the home. Porches offered an outdoor room where the family could sit together, children could play, older people could rock and watch, ladies could sew, bluestockings could read, teenagers could gab or cuddle in the evening, and people could gather for parties all summer long.

Porches, with their roof overhead, offered an outdoor refuge from rain and sun alike. The shade of the porch roof also helped keep down temperatures inside the house.

The 1950s saw the end of porches in new homes, ending the porch's 100-year reign as a necessary fixture in practically all new homes. Although some houses had porches in the colonial period, the porch did not become widespread until the 1840s and 1850s. Its popularity rose with the increase in leisure time in America, since it offered a cool and protected place for resting. 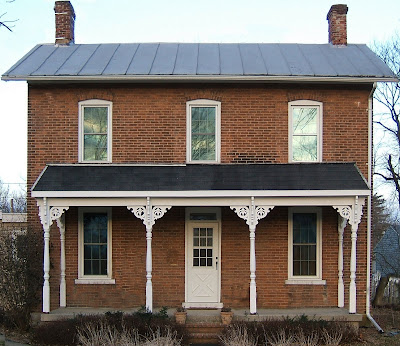 19th-century farmhouse with a porch.

Socially, the porch was the living room outside. "What the family room or TV room of post-World War II America would become, existed first as the front porch," notes the Evolution of the American Front Porch website. 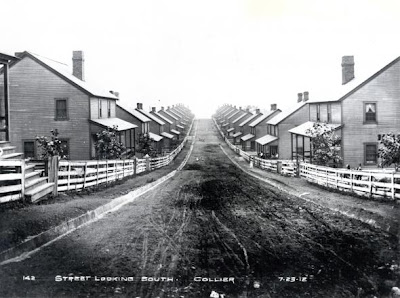 New homes with porches in Collier, Pennsylvania, circa 1900.

The front porch also invited community. In towns, informal interaction with neighbors and friends could take place from the porch. As the website notes:

For the front porch existed as a zone between the public and private, an area that could be shared between the sanctity of the home and the community outside. It was an area where interaction with the community could take place. The neighbors from next door might stop by one's house, to sit on next door might stop by one's house, to sit on the porch and discuss both personal and community issues. The couple walking down the street might offer a passing "hello," as they passed house after house whose inhabitants rested outdoors. The porch brought the neighborhood and community together, by forcing interaction and an acute awareness of others. Indeed, the front porch and the ideal of community in America had developed into a congruous union. 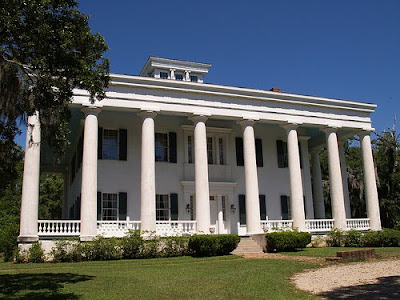 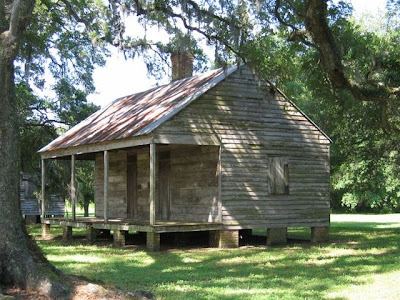 The decline of the porch can be attributed to new technologies that brought both prohibition to porch sitting and new sites for leisure. In towns at least, with the arrival of the auto and its fumes and noise, the front porch became less pleasant. In the early 1950s, the arrival of the television brought the family indoors for entertainment. Lastly, air conditioning squelched the impulse to sit outside on the porch and enjoy an evening breeze.

By the 1960s, reports Evolution, the front porch had disappeared in new homes. It began to be replaced with side porches hidden behind shrubbery or decks in backyards. The disappearance of the front porch increased family privacy at the expense of community life. Family life also frayed with the centrifugal forces brought by entertainment media in the home and a new focus on individualism, rather than on family and community.

The good news is that porches are beginning to re-emerge in new homes. Seaside, Florida, for instance, is one of several planned communities in the United States today where a front porch is mandatory. I, for one, would be pleased to see a porch revival. I say: The more porches the merrier! 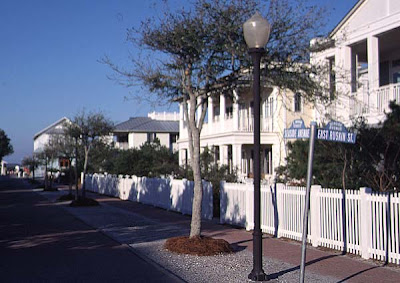 In Praise of the Mudroom

A mudroom is a small room or corridor, usually between the kitchen and the outdoors, that serves as a transition before entering the home. It's a boon to any homemaker lucky enough to have one. Here is my friend Christina's mudroom, which is not only of high utilitarian value but is also beautiful. Here is the mudroom as seen from the porch going into the house, 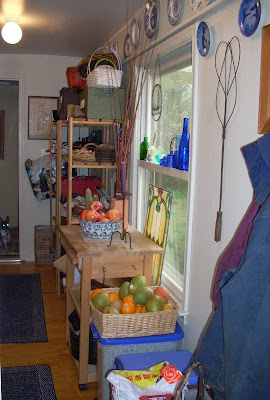 and as seen from the house going out. The window on the right opens to the kitchen. 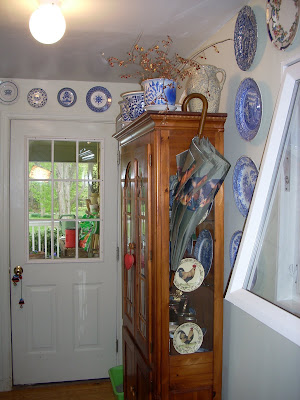 Like most mudrooms, this corridor is a catch-all for spillover from the outside: 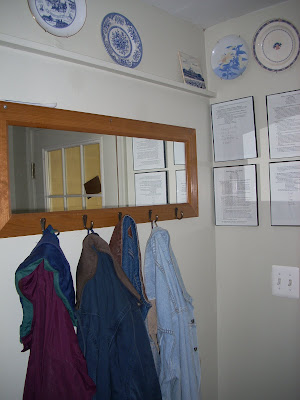 garden gear and coats and jackets 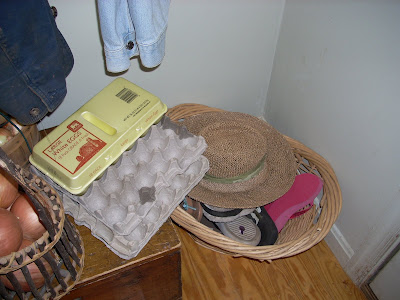 Hats and egg crates (Christina and her family have chickens), 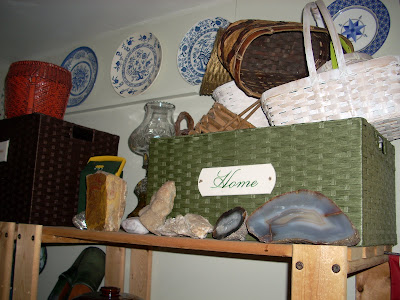 shoes, lined up on the shelf below, and baskets for use inside and out.

It also holds spillover from the kitchen. Since this room is unheated, in winter it serves as a second refrigerator--especially handy during Thanksgiving and the Christmas season. In all seasons, stored here are: 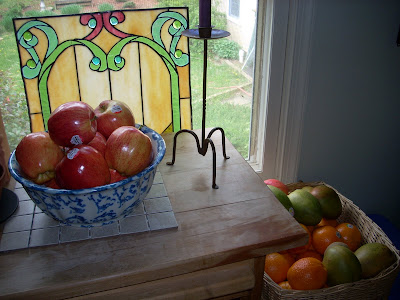 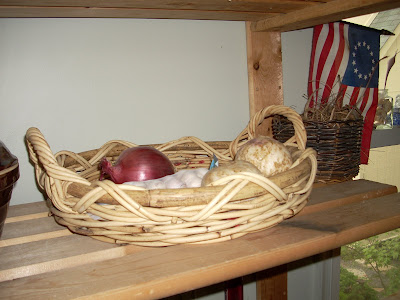 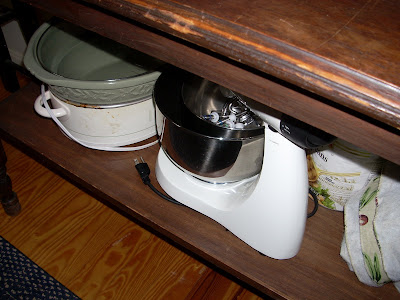 large kitchen equipment that is not used regularly, along with large pots for canning and a crock for making brandied fruit, 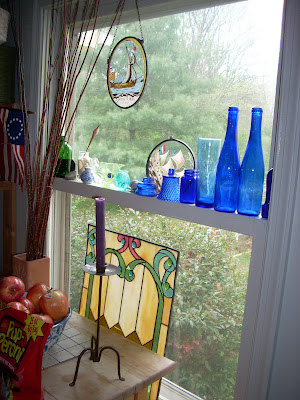 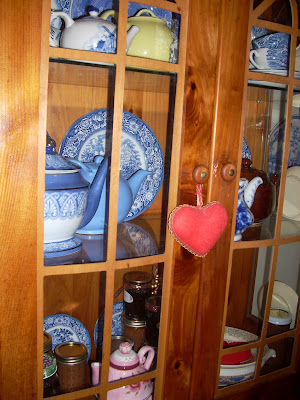 Right outside the door to the porch is a potting table, 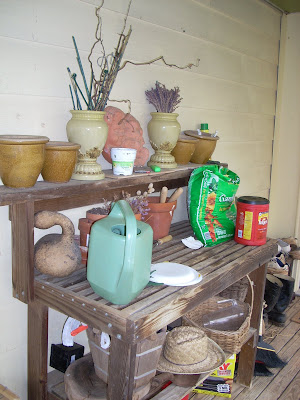 now in full swing for spring. 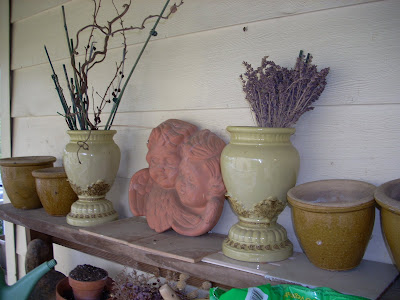 Labels: Home, Inspirations from the Present 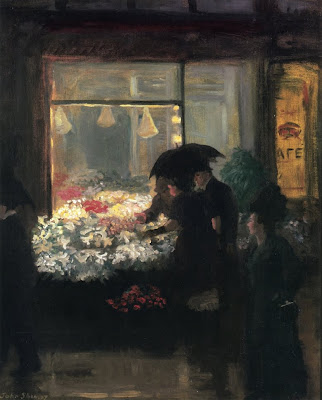 "And the light shineth in darkness; and the darkness comprehended it not."--John 1:5
Posted by Linda at Sunday, April 24, 2011 No comments: 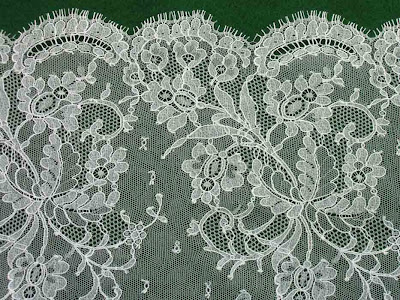 I love lace, so I was happy to hear from the Wall Street Journal that lace has made a comeback on the runway for spring and fall. The Journal shows how lace is still made today after decades of its virtual disappearance from the fashion world. I hope a revival of this ancient art can be sustained. As the Journal slideshow indicates, lace can be transformed for edginess. But to me there's nothing more feminine than lace. I wonder if its return signals a subterranean longing in women for clothes that are more feminine and less oriented toward the office. 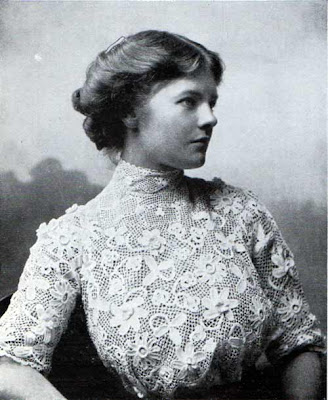 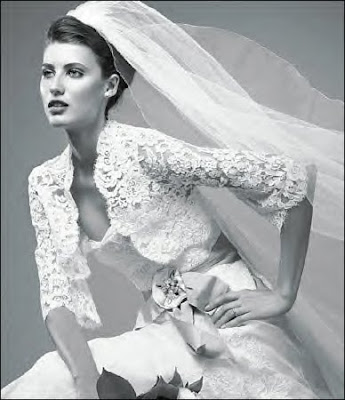 An Oleg Cassini wedding gown circa 2003 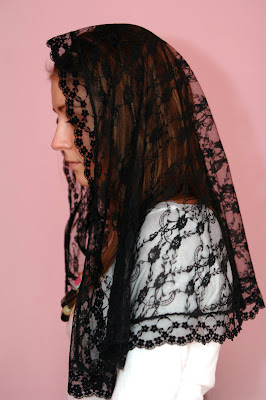 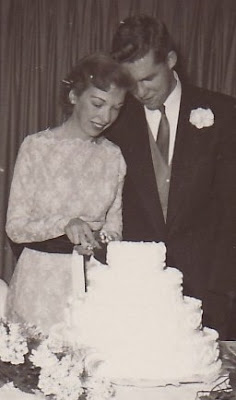 My mother at her second wedding in a dress she designed herself as a December bride--light green taffeta with a lace overlay and a dark green velvet sash, 1957.
Posted by Linda at Thursday, April 14, 2011 4 comments: 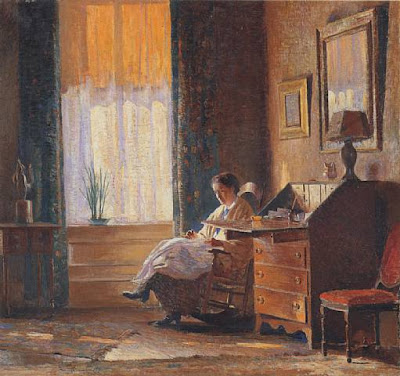 Interior Green Street by Daniel Garber. I imagine the Gale house in 1916 Manhattan with this ambiance--dark.

From the wiregrass country of Georgia in the 1850s, I zoomed up to New York City, time: 1916, with a reading of His Family by Ernest Poole. This book won the first Pulitzer Prize given for a novel.

Here on the verge of U.S. entry into World War I, Poole tells the story of an upper-middle-class widower, Roger Gale, as he attempts to hold together his family of three very different adult daughters.

His oldest is married with four children and pregnant with her fifth when the story opens. Edith is concerned, we are told, about 150 percent of the time with her children, and their well-being is the prism through which she sees the world. She is racing toward the suburbs, in terror of the tall-rise apartment buildings replacing the brownstones.

His next child, Deborah, is a school teacher in the tenement slums of New York City. "Down in my school we have a family of about three thousand children," says Deborah. Her ideas are painted in the most favorable light in the book.

The third sister, Laura, is rushing toward the flapper age and beyond as fast as her silk-stockinged legs can carry her. "What do you think the girls over there [in Europe] are going to do for husbands, with half the marriageable men either killed or hopelessly damaged? They're not going to be nuns all their lives!"

You can see that Roger has a real job on his hands. As each of these women are drawn by Poole, they represent a type rather than a fully developed character. Since their reactions are true to type, the novel is less of an exploration into the human heart than a dialogue of the views clashing in the cities during the second decade of the 20th century.

Poole's cleaving to ideas makes the book an eye-opener though. It is one thing to read history books about the avant-garde ideas emerging during the period before the Great War. It is another thing entirely to watch those ideas wreak havoc with a family. Since Edith is a reclusive mother, with little social involvement except that useful to social-climbing, she is regarded by both her younger sisters as a paragon of reactionary Victorianism, a despised burden on the family, and on humanity--even if her children might occasionally be enjoyed. (Somehow in the 20th century, motherhood must have made a comeback before it got knocked down again by Betty Friedan et al.)

Roger is a good man and vaguely an atheist, whose religion becomes distinctly Feuerbachian as the book proceeds: The great human family, which includes his own, becomes his highest universal. Neither he, nor the author it seems, notices that his lack of religious faith severely limits his ability to intervene successfully with his children.

With Deborah -- suffragette, volunteer social worker, and crusader for the poor -- and her friends, we see ideas that today we think of as being post-1960s, which are presented in a beneficent light:

Euthanasia--mercy killing, with or without the permission of the sick--should be permitted and is humane.

The old God of the religions is dead.

"Humanity" is the new god, replacing both God and any particular family as the object of devotion and loyalty.

Crimes, including second-degree murder, committed by poor people should not be treated as crimes, but such people should be given a chance, with opportunities in careers. Equality of opportunity and equality before the law are less important than economic equality.

Domestic life is not worthy of attention.

Motherhood must change: "All such mothers as you [Edith] are out of date and have got to change! ... We're bound together--all over the world--whether we like it or whether we don't! And ... if we want to keep out of war, we've got to do it by coming right out of our own little homes--and thinking, Edith, thinking," rages Deborah [emphasis not added]. Never does Deborah believe that the widowed Edith deserves a minutia of respect for the very difficult sacrifices she makes for her children. She and her brood are packed off for permanent residence in the country.

Poole frowns upon the rise of fascism in Italy and nails its goals accurately: "She [Laura] did not consider the war wholly bad.... It was clearing away a lot of old rubbish, customs, superstitions and institutions out of date. Musty old relics, she called them... She threw out hints about the church and even Christianity, as though it were falling to pieces. She spoke of a second Renaissance, 'glorious pagan era' coming.... She talked about a world for the strong, bits of gabble from Nietzsche and that sort of rot; she spoke blithely of Rome reborn, the 'Wings of the Eagles' heard again." Later, Roger reflects on his youngest: "She had hit it, struck the keynote of this new age. Rome reborn, all clean, old fashioned Christian living swept away by millions of men at each others' throats like so many wolves. And at last quite openly to himself, Roger admitted that he felt old. Old and beaten, out of date." Laura waltzes off to Europe.

Deborah--although in somewhat modified form--is the future, Poole seems to tell us. He was, not surprisingly, a socialist, and a journalist, who reported first hand on the Russian Revolution. His Pulitzer is, I think, an acknowledgment not of his artistry, but of his ability to write a book that mirrored his time and place. In this way, His Family puts the social issues of our own day in an interesting perspective.
Posted by Linda at Saturday, April 02, 2011 3 comments: