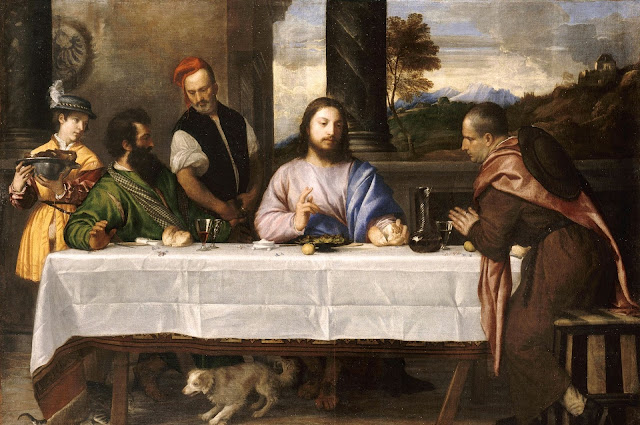 The great Venetian Renaissance artist,Tiziano Vecelli, known as Titian, in 1530 painted this beautiful evocation of the Supper at Emmaus, as told in Luke 24:13-35.

The Story
The story in the Gospel of Luke is prefaced by the words of the women, telling the disciples what they had seen and heard at the tomb of the risen Lord that Easter morning, but “…these words seemed to them”—to the disciples—“an idle tale, and they did not believe them.

“That very day two of them were going to a village named Emmaus, about seven miles from Jerusalem, and talking with each other about all those things that had happened. While they were talking and discussing together, Jesus himself drew near and went with them. But their eyes were kept from recognizing him” [emphasis added].

The two disciples and the stranger continue to walk together, and the disciples tell him of what has happened to Jesus of Nazareth and how “our chief priests and rulers delivered him up to be condemned to death, and crucified him.” They relate how it is now the third day since Jesus died, and that some of the women “were at the tomb early in the morning and did not find his body; and they came back saying that they had even seen a vision of angels, who said that he was alive. Some of those who were with us went to the tomb, and found it just as the women had said; but him they did not see” [emphasis added].

Christ gently chastises his two disciples, saying, “‘O foolish men, and slow of heart to believe all that the prophets have spoken! Was it not necessary that the Christ should suffer these things and enter into his glory?’ And beginning with Moses and all the prophets, he interpreted to them in all the scriptures the things concerning himself.”

As they near Emmaus, the disciples ask him to stay with them, rather than go on alone, “ ‘for it is toward evening and the day is now far spent.’ So he went in to stay with them. When he was at table with them, he took the bread and blessed, and broke it, and gave it to them. And their eyes were openedand they recognized him; and he vanished out of their sight” [emphasis added].

Many years later Pope Gregory the Great (540-604), revered as the father of Christian worship, preached on the Supper at Emmaus (Homily 23 in his Homilies on the Gospels). The two disciples on the road to Emmaus “did not, in fact, have faith in him, yet they were talking about him. The Lord, therefore, appeared to them but did not show them a face they could recognize. In this way, the Lord enacted outwardly, before their physical eyes, what was going on in them inwardly, before the eyes of their hearts. For inwardly they simultaneously loved him and doubted him; therefore the Lord was outwardly present to them, and at the same time did not reveal his identity. Since they were speaking about him, he showed them his presence, but since they doubted him, he hid from them the appearance by which they could have recognized him.”

The Painting
Titian paints the moment when the disciples suddenly realize that the stranger in their midst is Christ. Christ’s left hand is on the bread, and he raises his right hand in the gesture of blessing. At this moment, the disciple on the right—dressed as a contemporary Italian friar—brings his hands together and partially rises, perhaps to fall to his knees before Christ. The other disciple draws back in consternation.

The moment of recognition comes just as Christ repeats the blessing and giving of the bread, as in the Last Supper that initiated the Eucharist. Titian draws upon  Leonardo da Vinci’s The Last Supper, painted in the 1490s: a long frontally positioned table covered in white linen with Christ in the center flanked by his disciples, all of whom have highly individual reactions to Christ’s blessing of the bread. 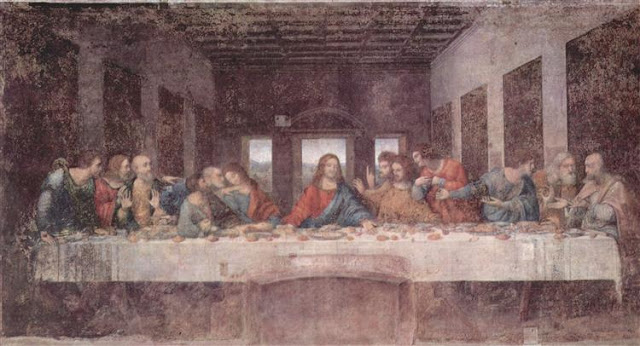 It is noted by art historians that the disciple to the left in Titian’s painting has a pose closest to that of Judas in Leonardo’s painting—a posture of withdrawal from the figure of Christ. At first I didn’t think this could be, but the half-medallion on the wall behind this disciple has the vague outlines of the torso of a hanging person, dressed in 16th-century garb, and a hook hangs from this medallion, while immediately to the right in sketchy white are what seem to be the shapes of a ribcage and perhaps a skeleton head. If this is at all a correct reading of this object in the upper left of the painting, then it is likely that there lies the shadow of death, Judas’ death in particular, in contrast to Titian’s celestial coloring of Christ, signifying the triumph over death.

Christ’s face, at the horizontal center of Titian's painting, has a serene, other-worldly quality—it is bathed in light and his downcast eyes, as in Leonardo’s painting, suggest a humility that is turned to that which is unseen. His face is in keeping with the sacramental actions of his hands. The friar to his right looks of this world, but his humility in pressing his hands together as in prayer and his positioning as if about to kneel before the now-recognized Lord, show his love of Christ and his own nascent holiness.

Leonardo’s famous painting situates the Last Supper before a trinity of windows opened to distant views of hills and sky. Titian’s single window opens up to a fully painted landscape and sky. The single tree stands as a remembrance of the wooden cross upon which Christ had died. (The tree seems slight, but alive, compared with the adjacent monumental Roman column behind Christ.) To the right, the earthen colors of the mountain continue into the brown cassock of the friar, and the beautiful blue, pale violet, and grays of the more distant mountain and sky are echoed in Christ’s gown and mantle. Titian chose to paint a sky in which the sun is unseen, but its light comes from behind gray storm clouds against an ascending sky of clear blue—a metaphor of light for the emotion evoked by the story itself. Titian’s unity of color signifies the harmony of Christ, God’s natural order, and the followers of Christ.

On the other side of the painting are more secularized individuals. The innkeeper has no awareness of or interest in the emotional tumult caused by the disciples’ realization that Christ is present. The innkeeper’s face is turned away, and his left hand sports a large ring of gold, perhaps pointing to the subject of his thoughts. Judas’s left hand, palm up, is immediately under the innkeeper’s hands.

Under the table a dog growls at a cat. In medieval and renaissance Christianity, dogs symbolized loyalty, watchfulness, and trustworthiness—not like the disciples that slept as Christ prayed in Gethsemane although he had asked them to watch, or like Saint Peter, who denied Christ three times, as Christ told him he would do—loyalty, watchfulness, and trustworthiness in contrast to fallen man. The cat often symbolized cunning and deceit, such as in the betrayal of Judas, sitting directly above. 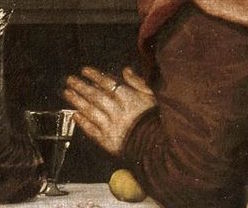 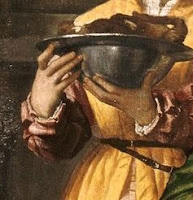 The most diminutive figure is that of the adolescent servant bearing food, who looks beyond Judas to the friar at the far side of the table but with no apprehension of what is taking place. His innocent interest, however, brings him far closer to Christ than the complacency of the oblivious innkeeper. 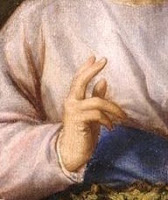 In all figures, Titian has painted hands that speak volumes of the inner life of their owners. The boy’s hands show a delicacy and tenseness of expectation and willingness to serve. Judas’ hands demonstrate his extreme surprise in seeing Christ, whom he had helped bring to what he believed would be certain death. The innkeeper’s hands, with his thumbs hooked in his belt, point to his earth-bound nature. Christ’s hands are carefully positioned in sacramental action, with the fingers of his blessing hand gracefully arched. The friar’s hands are those of one in prayer—any surprise he feels at his recognition of Christ is superseded by his humble desire to worship his Savior.

A striking feature of Titian’s painting is the prominence of the starched pure white tablecloth that stretches across the composition and touches all figures. Leonardo’s Last Supper table also has a white cloth with its fold lines, but our eyes quickly pass it by to look at the action above. In Titian’s painting, the white cloth is a symbolic reminder of the white linen burial shroud that enfolded Christ in burial and also of the white cloth laid out on a Christian altar. And this crisp, beautiful linen also brings to the mind the unseen women, who washed, starched, folded, and laid it—women such as those who loved Christ and first received the news that he had risen, and believed.
Posted by Linda at Monday, April 20, 2020 No comments: 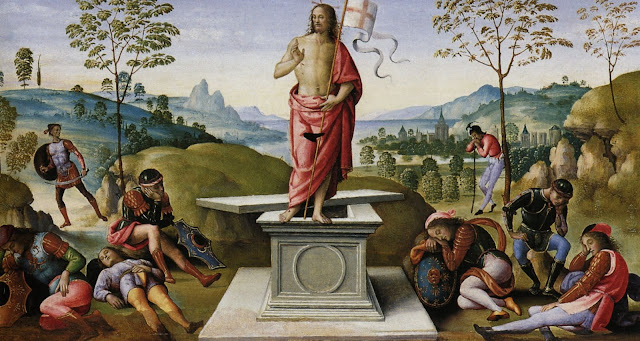 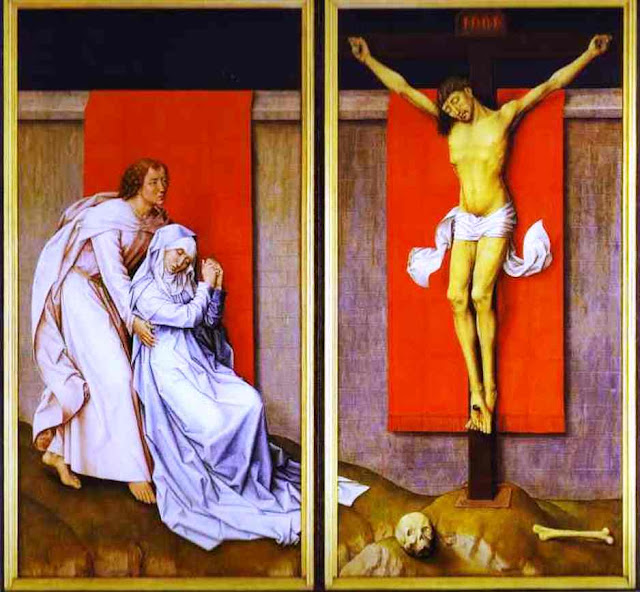 The Crucifixion Diptych by Rogier van der Weyden, 1460, Philadelphia Museum of Art.
Posted by Linda at Friday, April 10, 2020 No comments: