The Small Town as a Greek Chorus 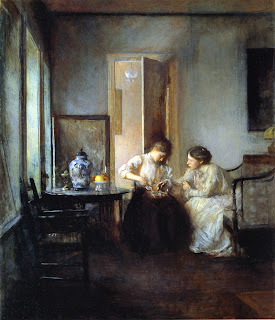 New England Interior by Edmund Charles Tarbell, 1906. I wonder if the interior that is the actual subject of this painting is the private conversation these two women are having, which, one gets the feeling, is not meant to be overheard.

I enjoy novels that are situated in small towns, where the town itself becomes a kind of Greek chorus--a veritable player in the plot, through its commentary on the real or imagined behaviors and thoughts of the town's residents and the story's main characters. Sometimes, this Greek chorus steers the action to tragedy, as in William Maxwell's Time Will Darken It. To me, the presence of the small town enables us to see the characters in context--much like a photograph of a person surrounded by their particular milieu gives us unique clues about the subject.

In his 1947 short novel Always Young and Fair, Conrad Richter explains how the small town weaves a cloak of talk around its residents. The story concerns a beautiful and well-to-do young woman, Miss Lucy Markle, who refuses to marry but remains faithful to her fiance, Tom Grail, who had been killed in battle in the Philippines two years earlier. As Conrad explains the workings of the small town of Pine Mills, Pennsylvania:


So far as I know, very little of consequence was ever kept strictly secret in Pine Mills, not even in the brick confines of the big Markle House. Cousins, callers, and maids all dripped like leaky taps to the thirsty town. In those days Pine Mills followed its own dramas passionately, the actors appearing on the stage in person on its stage. Today we are addicted to the same stories as then, but we take them at second and third hand through the radio and moving picture, and the actors are seldom seen except in bloodless images, much less passed in flesh and blood and bade good morning to on the street.

Everyone in Pine Mills, I am sure, must have known Lucy Markle's story and followed it intensely as a serial. The reader did not have to wait a week or month to know the next installment. It was always imminent, might possibly come today, and meantime, additions, missing passages, and revealing phases were constantly being filled in by friends and passers-by. There was not one editor of commentator, but many. Most of the town, I think, approved and respected Lucy for her stand.... Death and dignity were taken rather seriously then, and a girl of character stood fast. Lucy was showing her Markle and Grandmother Mattson blood, they said. It would wear off in time, and meanwhile a year or two out of respect for Tom Grail would not hurt her. It was respect to Company G, to the town which was Company G, and to the U.S.A. After all, Tom Grail hadn't given just a year or two but the rest of his young and lighthearted life.

Such is the town commentary in the beginning of the novel. Although many stories have been written about people's strong drive to get out of the small town they found stifling precisely because of its Greek chorus effect, it may be difficult to escape the human need to be part of some kind of community through church and other institutions or band of mutual friends, all of which invites talk and commentary on the doings of each of its members.

"Society," for instance, plays the same role as the small town in Edith Wharton's Age of Innocence. In The Late George Appley by J.P. Marquand, Prodigal Women by Nancy Hale (1942), and Joy Street by Frances Parkinson Keyes, the word "Boston" conjures up not a place but the explicitly understood views and opinions emanating from Beacon Hill, which seems to serve as some kind of lighthouse shining its value-laden light on the behavior of all Bostonians.

In the 1970s American society sought to cast off fear of castigation for any type of behavior, but today both sides in the social issues debate have their puritanical and intolerant streaks that disparage the attitudes of others with a vituperation that would rival that of any small town biddy. Facebook, Twitter, and online commentary also seem to answer a need for immediate human connection--ironic in a world in which people fought to exchange small town prurience for the relative anonymity of the cities and the suburbs. And today, instead of nodding our heads about "Markle and Grandmother Mattson blood," we would note, significantly, Markle and Mattson genes.