Saint Sebastian Tended by Saint Irene: An Image for Our Times 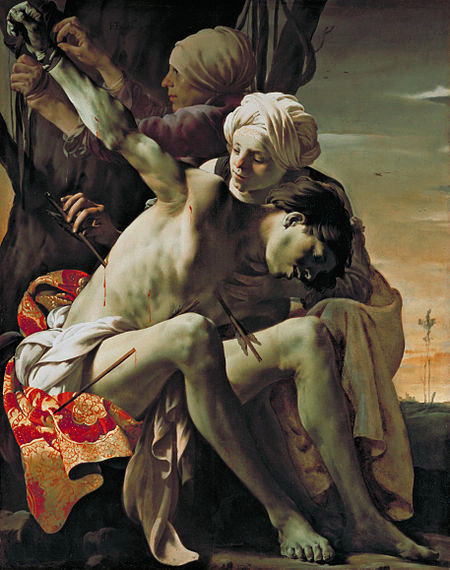 Saint Sebastian (256-288) was a Christian martyr who was tied to a post in Diocletian's Rome and shot through with arrows as punishment for his refusal to renounce his Christian faith. He did not die, however, thanks to Saint Irene, the widow of another martyred Roman Christian, who came to cut  down Sebastian from the post and bury him. Finding him still alive, she brought him to her home and nursed him to health.

The 17th-century Dutch artist Terbrugghen (1588-1629) paints the moment when Saint Irene and her servant rush to free Saint Sebastian and begin attending to his wounds. The painting, nearly 5 feet by 4 feet, is among the treasures at the Allen Memorial Art Museum in Oberlin, Ohio.

Terbrugghen was one of a group of Dutch painters who lived and painted in Italy, learning fluidity of form and drama from the paintings of Michelangelo Caravaggio (1571-1610). After seven years in Rome, Terbrugghen returned to his native city of Utrecht in 1614.

In the late Middle Ages, the arrows that pierced the body of Saint Sebastian became a metaphor for the fatal piercing of the flesh by the bubonic plague--the disease of the Black Death that ravaged Europe in the 14th century and continued to recur regularly in European cities. For this reason, Saint Sebastian is venerated by the faithful as a protector against the plague.

Saint Sebastian's protection was immediately relevant to the inhabitants of Terbrugghen's Utrecht, where the dreaded disease returned each summer from 1625 to 1629. Terbrugghen brings this home in two ways.

First, as Valerie Hedquist points out in an article for the Journal of Historians of Netherlandish Art (Volume 9, Issue 2 Summer 2017), the painter adds buboes on the body of the dying Saint Sebastian--on the inside of his right elbow and prominently on his right knee. He also shows the blackening of the saint's skin from the internal hemorrhaging the disease causes. The metaphor is now the reality.

Second, Terbrugghen heightens the immediacy of the drama by placing us so close to the life-sized figures. Saint Sebastian's right knee juts out beyond the picture plane, putting us right into the scene and drawing us upward toward the expressions of urgency and care in the faces of the saint's rescuers. As the art historian Wolfgang Stechow writes,


"... the action of the two women is the very life-blood of the picture. Loving care is about to conquer death; it is a tense struggle but it is a noiseless one. No punches are pulled in the depiction of the nearness of the end: the body of Sebastian is olive-grey, his mouth drooping, his left arm hangs limp, touching the ground behind his right foot. Yet the activity of the women bespeaks efficient help--but without resort to any ado. Wonderful is the quiet contrast between the neighboring hands at the upper left, and particularly, how the lifeless flesh of Sebastian's right hand yields to the pressure with lively resilience. It is as though this contrast sounded the key for the entire picture. Above the slumping head of the Saint appear the reassuring smile of Irene and the busily alert profile of her servant. The lifting of the arrow by Irene's gentle right hand is a masterpiece of depicting an action bent upon easing pressure and soothing pain, her left hand is a little wonder of subtle luminosity (The Burlington Magazine, Vol. 96, No. 612, March 1954).

Almost 400 years later, Terbrugghen's masterpiece prompts the modern-day viewer to pause and consider the courage of our first responders and hospital doctors and nurses as they act with all due haste to care for those sick with infectious disease.
Posted by Linda at Wednesday, March 11, 2020 2 comments: