Can Small Towns in America Be Revived? 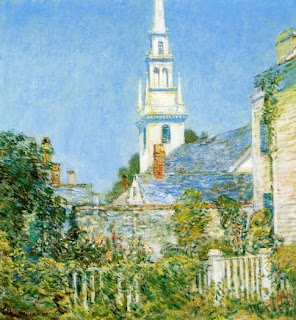 Church in a New England Village by Childe Hassam, 1901.

Childe Hassam (1859-1935)was a prolific painter and it seems painted nearly every place he came across in his long career: cities, seascapes, scenes from rural France, Paris, Italy, England villages, London, the western United States, gardens, people in parks, people at work, children. Among my favorites are his pictures of small town or town life, mostly in New England and Long Island.

Of course, when Hassam painted these works, many more Americans lived in small towns than they do today. In 1900, for instance, 10% of Americans lived in towns of between 1,000 and 4,000 people, and another 54% lived in hamlets or farms of less than 1,000 people. From 1900 onward, though, people were leaving rural areas heading for the cities; the decades of largest migration to the cities were in the 1930s, as farmers lost their land, as documented by Dorothy Lange and many others, and in the 1950s.

Today 17% of Americans live in small towns (categorized as between 1,000 and 5,000 people), and only 6.5% of Americans are involved in farming. However, since 1970, reports the Carsey Institute, the decline in population of small towns has begun to reverse, with the most growth in the 1970s and 1990s. Factors in this turnaround include retirees moving to rural areas where real estate and the standard of living are cheaper, immigration, and revival of rural areas with recreation attractions and what the Carsey Institute calls "amenities." Generally, new industries have not come to small towns that were once centered around textile mills, furniture making, and other manufacturing that have since gone south or overseas as a result of globalization. 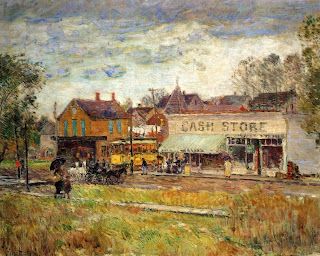 End of the Trolley Line, Oak Park, Illinois, by Childe Hassam, 1893. Oak Park is now a suburb of Chicago.

Nevertheless, small town life remains attractive to many people. The small towns of yesteryear tended to be organized around a single economic enterprise, which was matched with a culture that was for the most part culturally homogeneous. This is no longer the case, as people from the highly urbanized New England and Mid-Atlantic states move south, southwest, northwest, or north, and immigrants are moving into the American heartland without stopping first in the big cities.

I am hoping that one factor that boosts a revival of the small town is the ability to telecommute. A friend of mine picked up stakes from the burgeoning Washington, D.C., metropolitan area a new years ago and now runs a successful business, based mostly on clients in the D.C. area, from her home in a small town in Ohio, where she is close to family and a short walk from the bank, the town library, and the post office. The ability to grow small businesses is a critical factor in keeping small towns alive and growing. 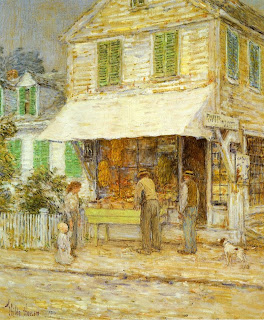 Small towns are also reversing their decline with the construction of new highways that permit distance commuting for those who work in metropolitan areas, but want to stay or move to a small town. It would be interesting to find out if the growing "eat local" movement has helped small town life by helping farmers.

The Great Plains and central Midwestern states still continue to see an exodus, particularly of young people, as the rural economy continues its decline, even with a Homestead Act passed a few years ago that gives tax incentives and other benefits to people who move into these areas and set up small businesses.

Homes Are Now Shrinking in the U.S.A. 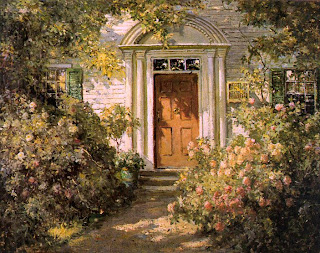 The size of new single-family homes completed last year dipped to an average 2,438 square feet, according to the National Association of Home Builders trade group, which analyzed Census data, as reported in the Wall Street Journal June 14.

The average home size peaked in 2007 at 2,521 square feet, after rising straight for three decades. Builders are now constructing smaller, less ornate homes to produce homes at prices that compete with the prices of foreclosures, which have not abated. Now, more than 50% of new homes have three bedrooms, rather than four, five, or more, and only 24% have more than three bathrooms.

The McMansion recalls the larger homes of the Victorian era, but without the Victorian charm--turrets, bay windows, and those beautiful wrap-around porches--and without all the children. The result, I always felt, was empty space and loneliness for those inside. 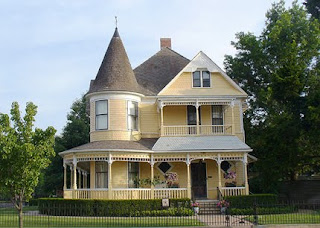 The Victorian house, which combines space with coziness in its rooms, lots of windows, additional rooms "outside" on the first-floor porch, and sleeping porches in the back for sleeping outside in the summer.

In the beginning of the 20th century, the Victorian house was on the wane, as the domestic labor market dried up. According to historian Witold Rybczynski in his fascinating book, Home: A Short History of an Idea, homes had to be reduced in size so that one woman could clean them. These were homes for a growing middle class-- growing from people coming in from farms and also immigrants coming up in the world from their start in city tenements. This led to floor plans like that shown here, a home in which there was not a lot of space for guests or family members outside the nuclear family, as in this Sears floor plan. 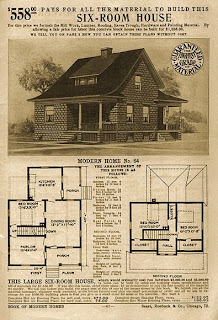 I think the shrinkage in homes is all to the good, a downsizing from a prosperity that relied on credit cards; homes seemed to balloon with the debt.
Posted by Linda at Sunday, June 27, 2010 No comments: 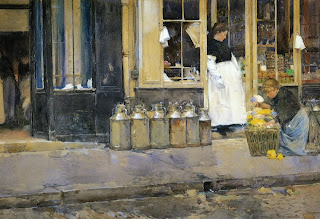 Here is a painting by the American impressionist painter, Childe Hassam, titled La Bouquetiere and la Latiere. The scene is likely Paris; the year is 1888.

Click on the picture to see it in a larger size.

Here are two women at work. They do not seem at all posed; with their activity or lack thereof and particularly with the nonchalance of the woman in the door of the dairy, this painting could easily be a photograph, taken for instance, by Henri Cartier Bresson. The ladies are completely un-self-conscious of the painter.

This painting reminds us that retail is an arena that has always employed women. I have never come across a book that discusses women's role in the retail trade. Does the woman in the door own the dairy, or does she just work there? Does she have a family to go home to, or does she live above the shop? Is she waiting for someone? Or is it the end of the day, as the dairy jugs in the front of the store might indicate, and is she just standing by the door to stave off boredeom and waiting to go home? Any minute now, we expect her to raise her head slightly, turn around, and go back inside. Meanwhile, the younger woman is arranging flowers and either getting ready for the day or returning from it. She seems unmindful of the dairy seller watching from above.

There is nothing romantic about the women in this painting. Rather, Hassam has painted them with the highest respect.

But the women are also the right and lower side of a triangle with the five dairy jugs, that actually sit in the center of the painting--every day object that one takes for granted but made beautiful with the light reflected off the sloping tops of the jugs. In its spirit, the painting reminds me of Vermeer's The Milkmaid, painting 220 years earlier. 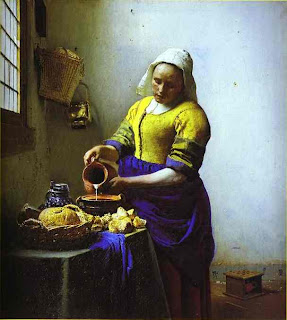 Eight of Hassam's works were shown at the 1913 Armory Show, the first major show of "modern art" in the United States, but Hassam opposed the shift to surrealism and cubism in no uncertain terms and his paintings receded to the background until the interest in the French Impressionists renewed interest in their American counterparts.
Posted by Linda at Monday, June 07, 2010 2 comments: