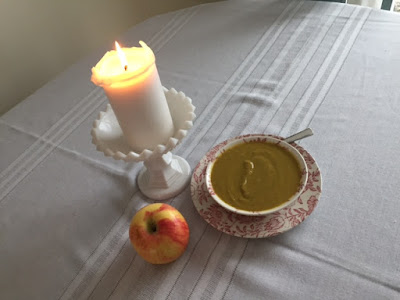 It's a bit late to talk about winter soups but we have more than another month before spring arrives. The picture shows a bowl of potage d'hiver I cooked up on our snow day last week. The idea of potage is to throw whatever you might have on hand in your fridge, sauté it, add water and some herbs as you like, and throw it in the blender. Perhaps it is a modernized version of the concoction referenced in the nursery rhyme "peas porridge hot, peas porridge cold, peas porridge in the pot nine days old." In those days, they threw everything in the pot and ate from the pot, threw more stuff in the pot, and ate some more....

Potage d'hiver is apparently now a French soup, and I love to make it in winter. Usually I take onions, leeks, carrots, celery, turnips, a small red potato or two, and a parsnip. In this case, I couldn't find any turnips, so I used what I had on hand:  onions, leeks, celery, and carrots sautéed in the pot with olive oil, then plain frozen peas, cauliflower, and broccoli added with water, and some herbes de provence and a lot of freshly ground pepper. Let that simmer for an hour or more, and then blend it up. It's a good stick-to-your-ribs lunch. I usually eat it plain, but any kind of garnish would be fine: cheese or garlic croutons, shredded cheese,  a dollop of yogurt or sour cream.

Another very simple potage d'hiver is this cauliflower soup:

Slice an onion and sauté in 2 TB of olive oil and 2 TB of melted butter for 15 minutes on low heat til soft, but not darkened. Add a head of cauliflower cut up into pieces the size of the florets and 1 cup of water. Put the lid on the pot and simmer over medium low for another 10 or 15 minutes, then add another 4 cups of water. Bring to a boil. Season with salt and pepper and keep on heat til the cauliflower is completely soft. Cool a bit and then blend up. The result is a creamy and delicious soup, but without the cream. Garnish with shredded parmesan or croutons, or both if you are having guests and serve a cup of this soup as a first course.

I like to make my own soups since they tend to taste far better than canned and lack the overdose of sodium and sugar canned soups tend to have.
Posted by Linda at Saturday, February 20, 2016 No comments: 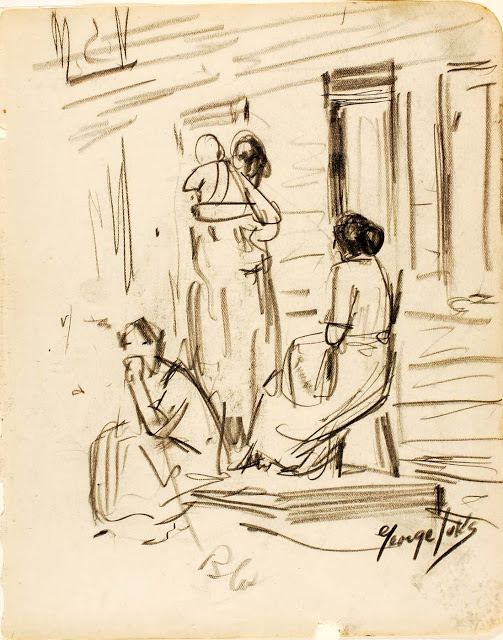 To me, this drawing exemplifies the miracle of drawing and painting. I happened upon it when I was looking at George Luks' work in preparation for this post. We could easily COUNT the pencil strokes in this drawing. And yet, we know exactly what is going on. Two women who are neighbors in the city are talking. They are not affluent, as indicated by the kitchen chair on the stoop and the babe in arms. The one with the baby is doing the talking and the one who is sitting is listening but not in rapt attention, as she is not looking up at the talking woman. We feel that they are friends who know a lot about each other. More than likely the standing woman is talking of things that must be done--I have to go in now, only have this for supper, a comment about the husband and when he is coming? Yes, the sitting woman may tiredly nod in agreement, I know what you mean.

Meanwhile, sitting in front is a woman who seems younger, who hears their conversation in the background, and is not attentive. It is the background noise of her life. She sits in a condition of inwardness, even as she looks onto the street before her, watching children playing or women on the way to the store or peddlers calling out their goods or men on the way back from work. But she is not thinking of them. She is watching and waiting. She may be waiting for a man or for a friend or, more likely, simply for her future, and she waits in anxious hope.

My words are a reduction of the atmosphere conjured up by Luks' drawing. With his few quick strokes of the pencil, he has created a world, and we instantly know its tone--cares, tiredness, neighborliness, boredom, and hope. A whole world on a piece of paper.
Posted by Linda at Friday, February 12, 2016 No comments: 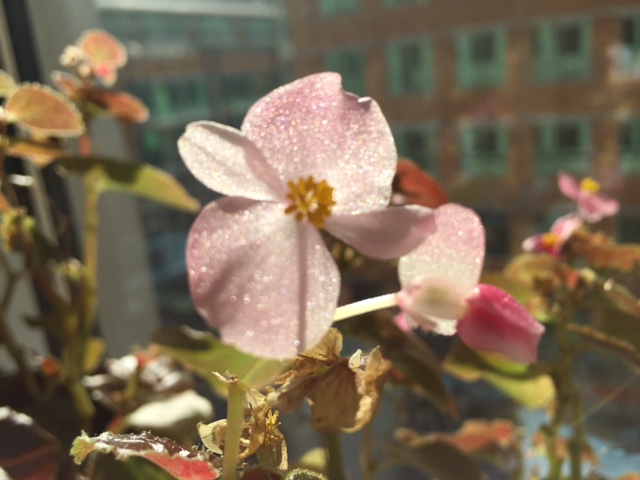 I looked at the begonias wintering on my office windowsill as the morning sun was streaming in, and this little flower was shimmering as the light filtered through its delicate petals. 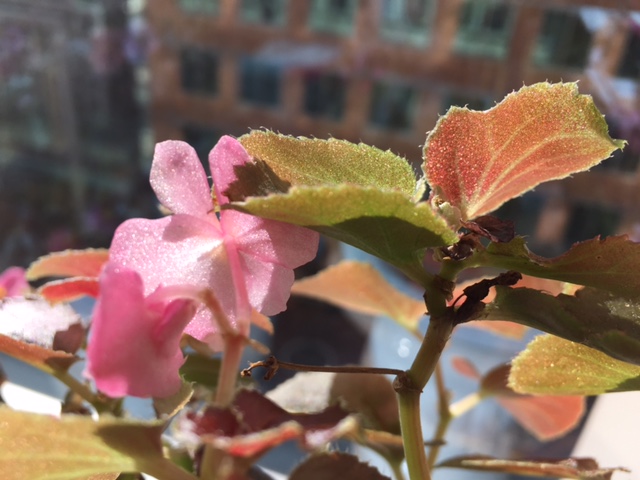 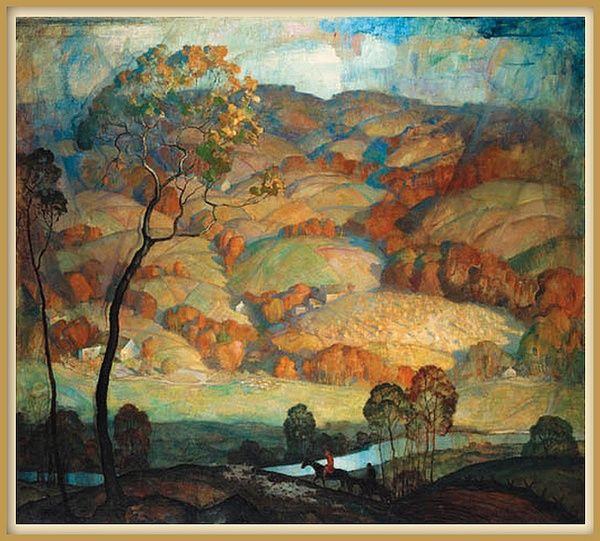 I posted this painting first in 2010, noting that it was by N. C. Wyeth "of his beloved Chadd Ford Hills, for which I have no words at all."

"From the hill...the country rolls back like some great billowing crazy quilt: patches of tender green corn interspersed with squares of ripe yellow wheat and the rich succulent greens of the woods. Great voluminous clouds boil up from hot, quivering horizons, blossoming in great bunches of ominous rain clouds."

N. C. Wyeth's letters are filled with beautiful passages like this. He was a great writer with the gift and willingness to lyrically pay homage to the people and land he loved. Note the gorgeous shimmering blue of the Brandywine River in the lower-center. 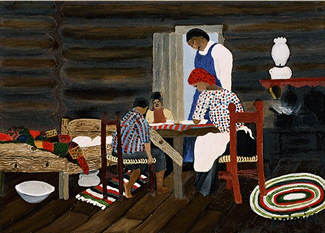 Giving Thanks by Horace Pippin, 1942

Horace Pippin was an African-American painter, born in West Chester, Pennsylvania,  in 1888, 10 miles from the Brandywine River. When he was a small child, his family moved to Goshen, New York, but he returned to West Chester in 1920 and lived there with his wife until his death in 1946.

Pippin was an artist who proved what courage and perseverance can achieve. He was forced by the illness of his mother to leave school as a young teen and work to help support the family. When World War I came, he joined the renowned African-American 369th infantry, called Harlem's Hell Fighters, all of whom received France's Croix de Guerre honor. Pippin returned from the war with wounds that rendered his right arm useless. This did not stop him from becoming an artist. To paint, he learned to use his left arm to prop up and guide his right hand. 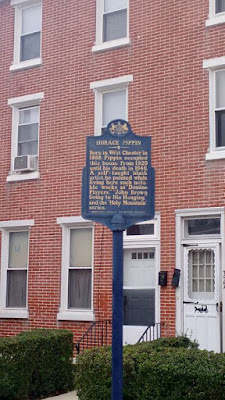 Horace Pippin marker outside 327 West Gay Street in West Chester, where Pippin and his wife lived. The marker says notes: "A self-taught black artist, he painted while living here such notable works as 'Domino Players,' 'John Brown Going to His Hanging,' and the 'Holy Mountain' series."

In 1937 at the behest of a local school principal, Pippin's work was shown in the Chester County Art Association show. N. C. Wyeth, a judge of the show, found his paintings impressive and began to open doors to Pippin. Wyeth introduced his work to the art historian, Christian Brinton, and from there Pippin's work began to be collected, including by Albert Barnes. His work also came to the attention of the pioneering New York City art dealer Edith Halpert. One year later, his work was being shown at the Museum of Modern Art in New York.  In 1994, a retrospective of his work, with more than 100 paintings, was shown at the Metropolitan Art Museum, and in 2015, the Brandywine River Museum had a major exhibition of his work.

Pippin painted many kinds of subjects--historical, allegorical, religious, and scenes from life in the Brandywine River Valley. Here is a small selection from among his scenes of domestic life. All of these paintings were done in the last few years of his life. Some of them have quilts, and in Domino Players, a woman is sewing one! Pippin may have been thought of as a folk artist, but I find in his work a sophistication of color and composition that goes beyond folk art, and an emotional intensity with an economy of line that folk art often lacks. 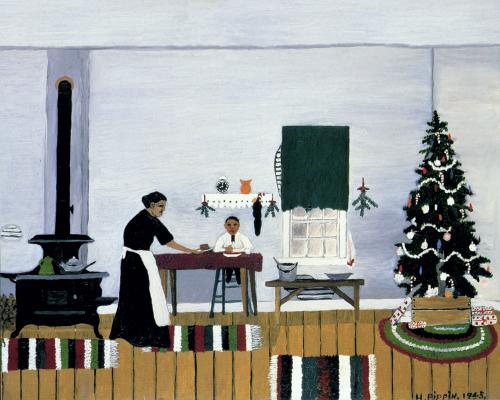 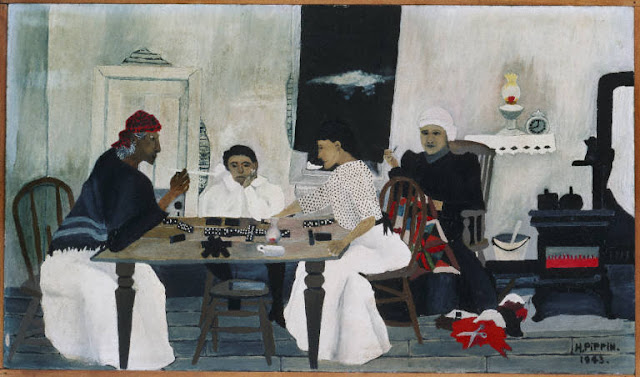 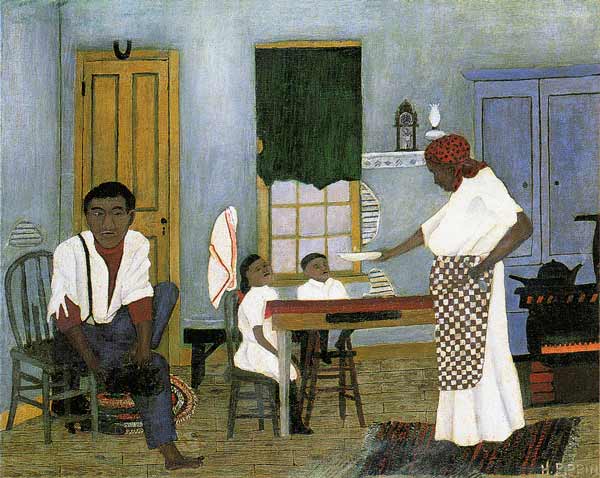 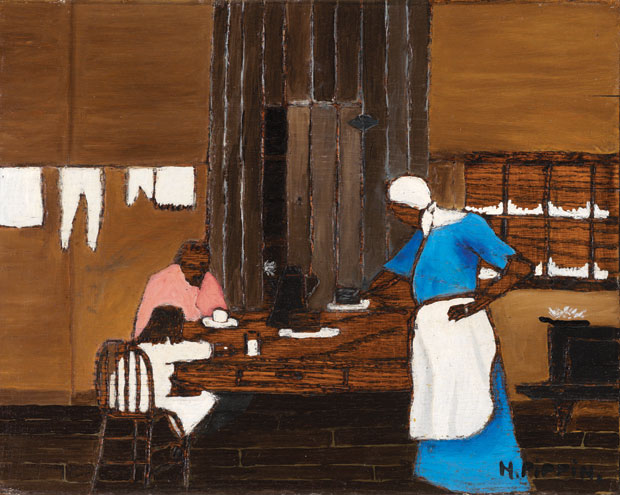 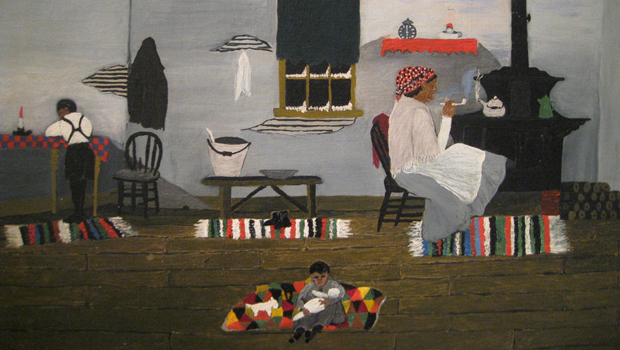 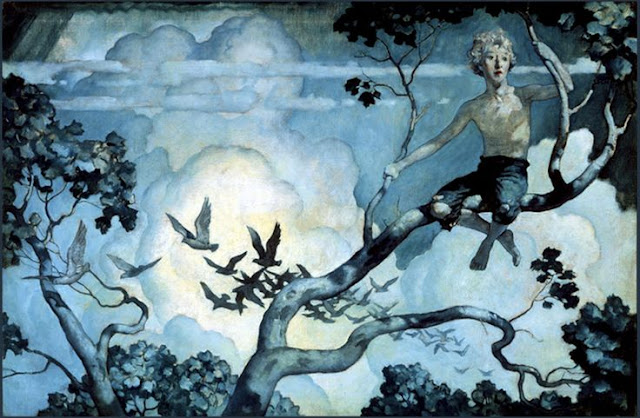 "My father was a terrific technician. He could take any medium and make the most of it. Once I was making a watercolor of some trees. I had made a very careful drawing and I was just filling in the lines. He came along and looked at it and said, 'Andy you've got to free yourself.' Then he took a brush and filled it with paint and made this sweeping brushstroke. I learned more then from a few minutes of watching what he did than I've ever learned since." 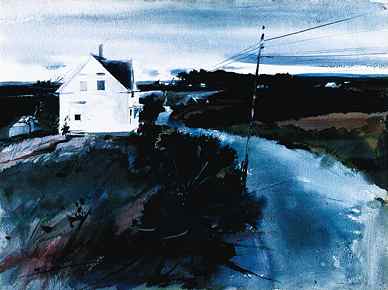 "Close to the holidays, my father painted by 4x5-inch Christmas cards. We'd stretch out in front of the  fireplace with the watercolors. He'd work in quick washes, not starting anyplace in particular. It was like whoosh, and out of that would come a leaf or an animal. His technique taught me to embrace accidents." 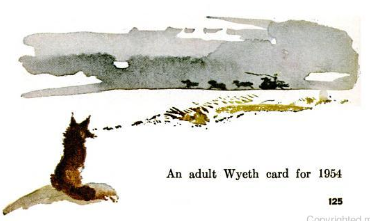 Of course, that's only part of the story.