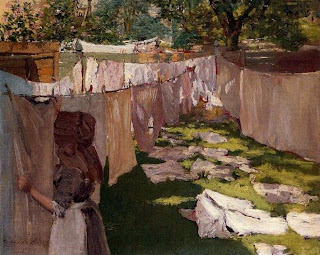 Wash Day. With the emergence of cotton, the laundry increased, and in the 19th century it was an arduous task. These white sheets and other linens were likely boiled and then blued.

This is the fifth installment of a report on More Work for Mother: The Ironies of Household Technology from the Hearth to the Microwave by Ruth Cowan Schwartz. My comments are in brackets.

The 19th century brought about a fundamental change in the division of labor in the home: Technology and mass-produced objects for the home freed men to take up jobs in industry. They also needed the jobs to acquire the cash to buy the mass-produced goods. "In almost every aspect of household work, industrialization served to eliminate the work that men (and children) had once been assigned to, while at the same time leaving the work of women either untouched or even augmented."

Working in leather to make shoes, whittling to make implements, butchering, getting grains to the mill for grinding, carrying water inside to the house (usually a child's job) are among the activities in the home that were eliminated."
Women's activities changed far less in the home. The mass production of cloth eliminated weaving, carding, and spinning, but it did not eliminate sewing. The sewing machine eliminated seamstresses but not sewing inside the household.
Laundry increased, because heretofore the materials that people wore were unwashable--woven woolen goods, felts, and leather. Linen was usually brushed. A big advantage of cotton was that it was easier to wash. Hence, laundry, one of the more onerous tasks in the home, was drastically increased.
Candle making became a lost art, but women then had to spend time washing the globes of oil and gas lamps. "In those cities in which the cleaning of outhouses and cesspools had been a commercial enterprise undertaken by men, the water closet privatized this work--and shifted it to women.
Home canning equipment increased women's work when the season was "on." 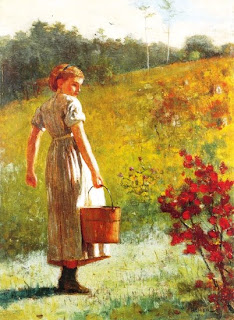 Girl Carrying Water by Winslow Homer. Water pipelines into the home eliminated this task, which was a usually a chore for children.

Despite the money to be earned by women in factories, most factory women were either single or in extreme poverty. "For the rest, the material conditions of domestic life during the first phases of industrialization required women to stay at home so as to protect (and even to enhance) the standard of living of their families: when women were absent, meals were irregular, infant mortality was high, clothes were dirtier, and houses poorly maintained."

Thus, by the end of the 19th century, instead of the man and wife working in the same sphere in a mutual enterprise--their home or homestead--the man and wife worked in two different domains, with the woman at home and, more and more, men working outside the home in industry and for the market. Within the home itself, there was no net decrease in the work performed by the lady of the house.

[Perhaps as equally important, the lady of the house faced increasing isolation in her work within the home. The changes were fueled also by urbanization (and vice versa), and in the rural areas, the family--in particular children--were still very much involved in helping make food--by harvesting and further processing the goods in the vegetable garden and orchards.]

Next: 20th Century Pluses and Minuses

Other posts in this series:
More Work for Mother 4 -- Enter the Stove