I know of three famous women writers who were also independent farmers: Marjorie Kinnan Rawlings (1896-1953), Beatrix Potter (1866-1943), and Isak Dinesen (Karen Blixen) (1885-1962). Do you know of more? For each of them their life on their farm and surroundings became an important source for their work. 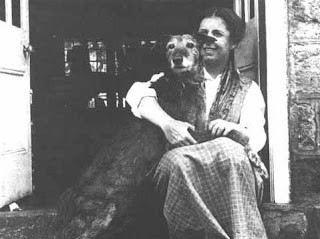 Karen Blixen in the doorway of her home in Kenya with her beloved Scottish deerhound.

In the case of Karen Blixen, she found herself in Africa and built and created her own coffee plantation there. When she had been thoroughly bankrupted in this enterprise, she returned to her native Denmark at the age of 50 with the prospect of creating a whole new life for herself and chose to write stories (Seven Gothic Tales, Winter's Tales, and others) and became a celebrated writer with a strong following in the United States. Out of Africa recounts her life in Kenya and is a masterpiece of beautiful writing. Her letters from Africa are also fascinating. See the movie Out of Africa, which is based on both the book and her letters. In contrast to the movie, however, which focuses on her affair with Denys Finch Hatton, Dinesen makes clear in her writings that her greatest love was Africa. 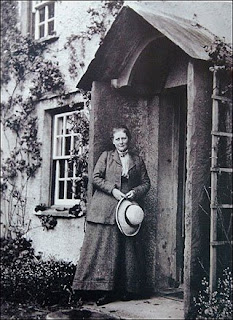 Beatrix Potter at the doorway of her home at Hilltop Farm.

A naturalist since she was a young girl, Beatrix Potter defied her parents to buy and live in Hilltop Farm, in England's Lake District, where she had vacationed since she was a child. Here she became a highly respected sheep farmer, a top sheep breeder, and a judge at agricultural shows. I think her beloved children's books need no introduction. See the movie Mrs. Potter and the lovely books about her: Beatrix Potter: Life in Nature by Linda Lear, and Beatrix Potter: Artist, Storyteller, and Countrywoman by Judy Taylor. 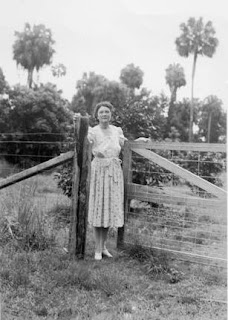 Marjorie Kinnan Rawlings at the gate of her orange grove farm in Floria.

Marjorie Kinnan Rawlings left her husband in New York to move to an orange grove sight unseen near Gainesville, Florida (home town area of Zora Neale Hurston), and broke through in her writing career when she took the advice of her editor, the famous Maxwell Perkins, to write about the people and life around her that she loved. She was a hunter and successful orange grove farmer. From here she wrote her biography, Cross Creek, The Yearling, the Cross Creek Cookbook, and her volumes of stories. See the movie about her: Cross Creek.

I also have photographic evidence that these three ladies all loved dogs.

Why is their work so closely associated with their farming lives? I am not exactly sure, but one thing is clear: the deep love that they had for their farms and the people around them gave them the energy and courage to draw beautiful books from themselves.

The parallels of the lives of these three women came to me thanks to The Farmer's Wife and At Home with the Farmer's Wife.
Posted by Linda at Friday, August 22, 2008

Labels: Books, Inspirations from the Past, Writing

Might I suggest Laura Ingalls Wilder as another writer/farmer?

Thanks for your blog.

Yes! Thank you. I knew I was forgetting someone. I love her descriptions of all the work they did on the farms, and in The Farmer's Boy, she talks about how they did spring housecleaning and also how they cooked and baked. I will add a post on her as soon as I can.

I think Tasha Tudor may qualify for this list of farmer/authors.
Lori-Lyn Mosby