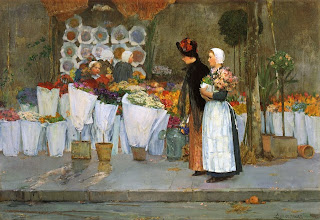 At the Florist by Childe Hassam, 1889

In Paris in the years 1888 and 1889, Childe Hassam created a series of paintings of flower sellers at their work. At the time, the flower sellers congregated around the Bastille. At the Florist is so beautiful pictorially, it nearly takes your breath away. (Click on a painting to see it better in a larger size.) I love that Hassam has painted the very young flower sellers wrapped in the same white as the flowers themselves. The one girl whose face we see has the feature and aura of a cherub from an Italian Renaissance painting. The same white wrapping is picked up in the cap of the maid accompanying her mistress to the florists. 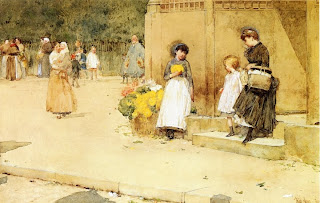 The Flower Seller by Childe Hassam, 1889.

In this painting, Hassam highlights the relationship between the two girls in the painting: the flower seller and the girl walking with her mother. The flower girl looks imploringly at the younger girl, and one assumes that she wants the child to ask her mother to buy her flowers. The younger girl meanwhile is fascinated by the flower seller. Either she is looking at the flowers, but more likely she is apprehending the flower seller as a young girl, like herself, but in a startlingly different position than herself; the flower seller has no childhood, having been hurled into adult activities for reasons of family poverty or even loss of family. The mother meanwhile ignores the flower seller and is hustling onward. I find it noteworthy that in the painting Hassam's shadowing of the heads of all three figures makes it appear almost as if each has a nimbus. In the left middle ground is the figure of a mother and child, the mother clearly from the working class. "There but for the grace of God go I." 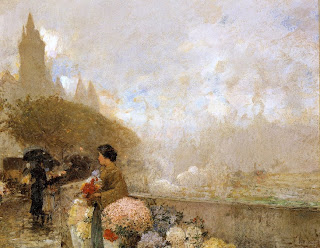 Flower Girl by the Seine by Childe Hassam, 1889.

In this painting again, Hassam is focusing on the contrast between the flower seller and the flower buyer. As can be seen from umbrellas carried by those who have already passed, it is raining, but the flower girl lacks cover. She is looking at the woman in black with her black umbrella, who has just bought flowers now held by her daughter. We have little doubt that the flower seller as she gazes at these two is pondering the difference in their stations in life.

Parisian flower sellers were organized. One hundred years before Hassam painted the subject, the flower sellers of Paris put forward a Cahiers de Doleances (Register of Grievanes) to the Estates-General (spring 1789--the year of the French Revolution) to protest the dismantlement of the flower sellers' association in 1777. The cahiers begins:

The freedom given to all citizens to denounce abuses that press on them from all sides to teh representatives of the nation is doubtless a certain omen of an impending reform. Confident of this, the flower sellers formerly forming the community of the female sellers of flowers and bouquets of flowers of the city and suburbs of Paris dare to address themselves to you our lords [the Estates General]....

Heretofore, flower seller candidates had to pay a fee to join the flower seller association, which had been formed in 1735 "through the kindness of Louis XV." The association's banning in 1777 under the laissez-faire doctrine of Finance Minister Anne Robert-Jacques Turgot, caused a leap in the number of flower sellers and hence a commensurate decrease in each woman's share of the market, "as the number of consumers does not increase proportionally" to the growing number of sellers. This was causing problems within the flower selling community:

The lure of thee earnings, however, limited as they are and even more a strong propensity to idleness, encourages a crowd of young peole of the fair sex to practice the profession of the supplicants, and since their profession cannot feed them, they seek the resources they lack in licentiousness and the most shameful debauchery. The supplicants' cause is also that of morality.

The flower sellers community particularly directed its cahiers to the Third Estate (the elected representatives), who are "friends and brothers and it is to them that it falls to plead the cause of the destitute."

The supplicants will not cease to send wishes to heaven for the preservation and prosperity of the representatives of the nation.
Signed, The said merchants, represented by Madame Marl, syndic of the community.

I love your photos. A new artist for me to check up on.