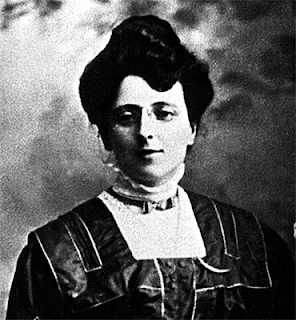 Lucy Maud Montgomery in a photo taken before the 1920s.

Lucy Maud Montgomery, author of the beloved Anne of Green Gables and many other books, was married at the age of 39 to a Presbyterian minister Ewan MacDonald and had two sons. As a housewife, she took care of the family’s needs and raised her children, while she also performed all the social duties expected of a minister’s wife. Throughout this time, she continued to write her books, her journals, and many letters. Alexandra Heilbron’s book, Remembering Lucy Maude Montgomery, features an interview with Montgomery by the Toronto Star published November 28, 1925, in which the writer was asked to comment on if it is possible for a woman to balance a career and family.

Montgomery, almost 51 years old at the time, gave a reply that could be an argument for telecommuting today: “There are really two answers to this problem. One is affirmative and the other is negative. I would say that a woman may successfully combine a profession of her own with the oldest one in the world, that of wifehood and motherhood, but only if she be able to pursue the career at home.” All professions involving the arts and even being an attorney, she said, could be done at home. Today’s communications have, of course, created a home option for many occupations.

“It doesn’t seem to me possible for a mother to be to her children what she should if they are only the recipients of her left over time, and are, for the major part under the care of paid help,” the writer explained. As evidence, she noted that infant mortality is far higher in institutions than it is “even in poor families,” to argue that the love that a mother bestows on her children cannot be replaced and is crucial to their well-being. “Children have died, and more will die for love,” she said. Montgomery extended the same argument to why women should do a lot of housework themselves—because of the love that attends it. 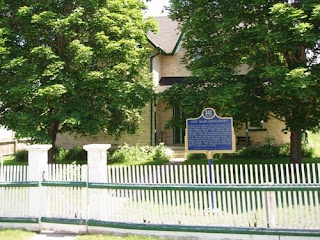 The Presbyterian Church's manse in Leaksdale, Ontario, where Montgomery was wife and mother from 1911 to 1926.

The secret to achieving a balance between home and family at home, Montgomery, said is “system.” “Just take that homely old adage ‘A place for everything and everything in its place,’ and add to it ‘and a time for everything and everything in its time.’” She then described the schedule for her day, which lasted from 7 in the morning to midnight. In the morning, she arose, got breakfast on the table, packed her children’s lunches, and squared away the post-breakfast kitchen. Then she went upstairs to “a room of her own” and did her writing from 9 until noon—no more. She then attended to whatever activities of that day were required in her role as minister’s wife and to the day's household and motherly duties.

“Give a woman a profession which she will be interested in and devoted to, give it to her within the four walls of her own home and the knowledge that she is not neglecting her home, her husband or her children will give her greater strength and purpose for the career which will be satisfying her need of self-expression, and will bring pride to her family, without any of the pain of renunciation.”

This may be ideal for many women who have reached a certain level of household. Of course, many mothers have no choice but to work outside the home—either because they are single mothers, or because the income of the husband alone is not enough to cover necessities and they can only find jobs outside of the home. This poses a different question that needs more exploration, I think.
Posted by Linda at Thursday, October 30, 2008